Churchill is hero, not history, and Britain still lives under his shadow. 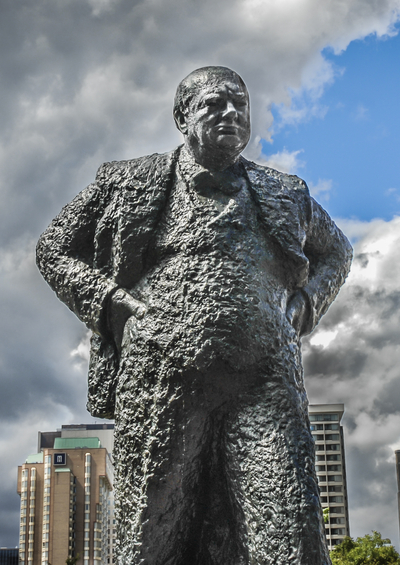 Two biographies of Churchill, one in English, one in German, have just been published. Boris Johnson, the Mayor of London and favorite to succeed British Prime Minister David Cameron as leader of the Conservative Party calls his “The Churchill Factor. How One Man Made History.”

In England, Churchill overwhelms all other political leaders. He is hero, not history, and Britain still lives under his shadow as both these book show.

After the war, Sir Henry Tizard, the UK Government’s chief scientific advisor noted that after 1945, “We are not a great power and never will be again. We are a great nation, but if we continue to behave like a Great Power we shall soon cease to be a great nation.”

The uncritical Churchill-worship that infuses British politics may hinder — not help — the clarity needed to work out what Britain’s future is.

Of these two books, Thomas Kielinger, a German Anglophile since his early days lecturing at a provincial British university, provides a more balanced account, drawing on many more sources than Boris Johnson, who takes as holy writ anything his hero wrote or said.

But Kielinger will not be read outside German-reading Europe, whereas Johnson has already paraded his book at the Yale Club of New York on the basis that the future leader (in his eyes) of the Conservatives should write about its most famous past leader.

In a cruelly devastating review of the Johnson book in the New Statesman, Richard Evans, the most senior history professor at Cambridge, mocks Johnson thus, “Anyone who has the time or energy to press a couple of keys on a computer to look up ‘tank,’ ‘RAF,’ ‘welfare state’ or even ‘the Second World War’ on Wikipedia will see Boris’s sweeping claims vanish in a cloud of inconvenient facts.”

“Churchill did not, as Boris claims, invent the term ‘Iron Curtain’ to describe the barrier between Soviet-dominated Europe and western Europe. It was first used by the Nazis – above all, by their propaganda minister Joseph Goebbels.”

“Nor did he invent the term ‘Middle East’: It was coined by the American naval thinker Alfred T. Mahan in 1902. At many junctures in the book, the ability to think historically deserts its author.”

Kielinger, by contrast, shows a steady hand blending archival research. He also points out that Churchill as Colonial Secretary in 1922 drew up the disastrous frontiers that make Iraq impossible to govern as a unitary state.

Neither book deals with the psychotic hatred Churchill had for Indians. Three million Bengalis died of starvation in 1943-1944 because Churchill took their land to grow jute for wartime sandbags. No grain or rice was made available though plenty were on hand from Australia and stockpiled in imperial India.

Churchill had already derided Gandhi as a “half-naked fakir” and said, “I hate Indians. They are a beastly people.” When he was given reports of this genocidal starvation of Indians, Churchill asked why Gandhi hadn’t died yet. The famine was their own fault, he declared at a war-cabinet meeting, for “breeding like rabbits.”

Kielinger prints a 1933 cartoon of Churchill from the Daily Herald. It portrays him as an SS trooper, hand flung up in a fascist salute, marching ahead of a Swastika-decorated banner denouncing Gandhi’s peaceful campaign for independence. Johnson just skips over this uncomfortable but important chapter in the Churchill history.

Kielinger deals with the equally uncomfortable issue of the mass firebombing of German civilians. Sixty of Germany’s main cities were destroyed long after the western allies and the Red Army were closing in on Germany.

“It is one thing to kill a dictator but should he kill all his people?” questions Kielinger. Johnson repudiates this charge, arguing, “Churchill’s war was never with the German people.”

Given that 1 million German civilians were killed or injured by bombing of cities – hardly military targets – Kielinger is the historian and Johnson the apologist.

Having sold out the Poles to Stalin at Yalta, Churchill then gave the green light at Potsdam to the biggest ethnic cleansing in recorded history. Twelve million Germans were driven from from lands they had lived in for centuries.

One of them was a boy from Danzig called Thomas Kielinger. The German biographer simply records the facts, leaving the reader to make a judgment. Johnson acts as a histrionic defense advocate unable to admit his hero has a single stain on his escutcheon.

Hagiography in service of current ideology

Johnson, who heads the anti-European wing of the Conservative Party, ties himself up in knots over Churchill’s repeated wartime calls for supra-national government in Europe and his 1946 appeal for the creation of a “United States of Europe.”

Johnson writes about a “Gestapo-controlled Nazi European Union,” as he lurches around the landscape of Churchill’s life, trying to find support for his own anti-European ideology.

Both biographers do at least write about Churchill’s instructions in his last weeks as prime minister in 1945 to prepare plans for “Operation Unthinkable.” This was to be a surprise assault on the Red Army with a view to achieving Churchill’s ambition of defeating Bolshevism.

Churchill rightly saw Bolshevism as a mortal challenge to British imperialism. His generals told him he was mad and the papers were buried for decades.

Later in June, 1953, the West German Chancellor Konrad Adenauer went on a panic visit to see Churchill after the re-elected British premier had made a bizarre speech suggesting a UK-USA-USSR summit after Stalin’s death with the proposal of declaring Germany neutral – a long time aim of Soviet foreign policy.

Washington was not interested. According to the German note of the meeting Kielinger quotes, Adenauer found the British prime minister unfocussed, rambling and looking quite gaga.

Die Welt published a cartoon of Churchill as Neville Chamberlain waving a bit of paper with “Peace in Our Time” on it, as Churchill appeared to have reversed his stance at Fulton and was now keen to appease Soviet tyranny.

Churchill’s bizarre idea that Soviet communism was interested in working with democracies was quickly forgotten. It does not, of course, appear in Johnson’s hagiography.

Professor Evans writes that the endless howlers in Johnson’s Churchill “will ensure this book has a very brief shelf life.” German readers are much better served by Kielinger’s work.

History now needs some serious re-thinking of Churchill mythology. In the summer of 1940, he rendered service to freedom that few men in history have ever managed. But much of the rest of his time in public office was crammed with bad judgments, loopy policies, windy writing, contempt for opponents, crude racism and a nostalgic belief in the past.

No one can remove the glory of his stand against Hitler along with the British people in 1940. But compared to a Napoleon or a Roosevelt, who utterly transformed their nations, Churchill was a leader when it mattered, but other than in 1940, Britain got on better without him.

And today, the Churchill industry allows Britain to wallow in an imagined glorious past and not to be required to think about today’s problems, let alone prepare for the future.

Churchill was a leader when it mattered, but other than in 1940, Britain got on better without him.

Churchill had a psychotic hatred for Indians and derided Gandhi as a “half-naked fakir.”

Churchill’s bizarre idea that Soviet communism was interested in working with democracies was quickly forgotten.

Churchill was a leader when it mattered, but other than in 1940, Britain got on better without him.

Churchill had a psychotic hatred for Indians and derided Gandhi as a “half-naked fakir.”

Churchill’s bizarre idea that Soviet communism was interested in working with democracies was quickly forgotten.