Delivering the Next Economy

Why is the transition to a green economy akin to a new industrial revolution?

Why is the transition to a green economy akin to a new industrial revolution? 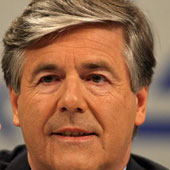 More than anything, the new industrial revolution must transform the way we live in our cities. Urbanization is the defining trend of the early 21st century world.

By 2050, around 70% of the world’s population will live in cities. That is more than six billion people. And that means we need to make massive improvements in infrastructure. Transportation, buildings, power supply, water supply — it all needs to become much more resource-efficient and energy-efficient. At a time of fiscal stress, paying for these improvements is a big challenge.

Zeroing in on this set of challenges, however, helps us address three pivotal questions:

Green growth is not only about combating climate change. Green growth is also a question of energy independence and therefore energy security — in other words, national security. Green growth is also good economics.Energy efficiency makes sense. In mature economies — including the United States — it has already created hundreds of thousands of jobs. At a time when job creation is very important, that performance matters all the more.

In emerging markets, populations are growing, and energy needs are increasing. This puts stress on conventional sources of energy.

All of these considerations point in the same direction: Economizing on energy and other resources, developing alternative sources of energy and limiting the environmental impact of economic activity.

This involves a huge paradigm shift: We need to set up the infrastructure to deliver low-carbon energy. We must also restructure the supply chains which deliver conventional, high-carbon energy. This will take innovation, leadership, perseverance and, undoubtedly, time.

But our actions can also have an impact in the near-term. Providing low-carbon energy is a business which will triple in size over the next ten years. By some estimates, it could be worth around $2 trillion by 2020.

All around the world, companies are sensing the opportunity, investing in it and capturing leadership positions in new technologies. And governments are creating incentives for them to do so.

Clean energy investment in Asia as a whole rose 37% in 2009. In the United States, the Recovery Act includes $90 billion of green stimulus spending. So far, around $20 billion has been spent. That created 190,000 additional jobs.

Short-term spending measures can be useful as shock absorbers after a crisis, but they are not the lasting answer. The real key lies in a clear, long-term strategy of transition.

Delivering the next economy will involve significant investment. And investors, for their part, are looking for a policy framework that delivers on three counts: It must be transparent, it must be long-term and it must be certain.

Let me turn to my second question: Who wins the race for leadership? Before we talk about the players, let’s first take a look at the playing field.

In 2009, according to the International Energy Agency, subsidies for renewable energy amounted to around $57 billion. But we spent around $312 billion, globally, on subsidizing fossil fuels. That means $6 were spent on subsidizing the old paradigm for every dollar we invested in the new. We should correct this imbalance, as the G20 recommended at the November 2010 Seoul Summit.

To create a coherent alternative energy policy, there is one essential first step: We must establish a price for carbon. The world needs an estimated $45 trillion of investment in clean energy between now and 2050 — if we are to limit global warming to two degrees Celsius.

Unless we have a carbon price of at least $25 per ton, it will be difficult to raise the $100 billion per year in funding for emerging economies which was promised by industrialized nations in Copenhagen in December 2009.

There are several ways to price carbon. In Europe, it’s explicit, via the cap-and-trade system. But carbon is also implicitly priced by official standards — for vehicles and buildings in particular. Here in the United States, for example, fuel-economy standards for cars were raised, and that has reduced carbon emissions per mile by 14% in the past five years.

And then there are so-called feed-in tariffs. These have been very influential in accelerating the development of wind and solar power. In Germany, the feed-in tariff has helped create a $30 billion renewable energy industry — and 300,000 jobs — in a few years.
Now let me turn from the playing field to the players:

China has established itself as a world leader in green technology. It is now number two in wind power, with 22 gigawatts of installed capacity in 2009 — enough to power about 17 million homes.

China is the world’s largest manufacturer of wind turbines and solar panels, and is fast-growing in battery technology and electric cars. China has the potential to become a major manufacturing hub for electric vehicles. Already, there are 120 million electric bicycles on Chinese roads.

When I was in Beijing last month, the message I got from every quarter was clear: China is determined to be a winner in the race for energy technology leadership. China’s leaders see green growth as an integral part of the country’s future growth story, and an essential element of China’s energy security. They plan to invest $750 billion in the next decade. In China, green growth will shape the next economy.

The United States has the potential to be a winner in energy technology and lead the world, as it has in so many other areas. But to do that, the United States must make bold decisions and commitments — and soon, so as to avoid falling behind. I have strong faith in the entrepreneurial and innovative spirit of this great nation.

The United States can seize this opportunity. But make no mistake: A new world order is emerging.

The race for leadership has already begun. For the winners, the rewards are clear. Innovation and investment in clean energy technology will stimulate green growth. It will create jobs. It will bring greater energy independence and national security.

This initiative involves unique collaboration between North African, Middle Eastern and European partners. We aim to harness the potential of wind farms and solar power plants in the Sahara Desert.

This could produce up to 15% of Europe’s electricity by 2050. The people of North Africa will gain new access to energy. The project will stimulate the economy of the Mediterranean region. Yes, it is ambitious. It is even bold — but it will provide benefits for all involved.

This brings me to my third question: How do we pay for the transition to the next economy?

Here, I see three imperatives. First: The public and private sectors must come together to finance the investments that green growth needs. Second: This commitment involves sharing the risks. And third: Carbon markets need to be developed a lot further.

But there are barriers to this investment: Start-ups face challenges. Domestic capital markets in some nations are still underdeveloped — and some do not cater for inflows of foreign capital. Technology can be risky.

These barriers to investment need to be removed. The public and private sectors need to work together to provide financing and assume risk.
The U.S. Department of Energy’s loan guarantee program is one example. Public money is tight, so it’s important to make public spending go as far as possible — and leverage the multiples provided by private-sector finance if we can.

In Germany, the government recently set up the Global Climate Partnership Fund, together with the country’s development bank, KfW. The government and KfW will put in around $70 million, including first-loss equity capital. This will leverage at least $500 million of joint public and private investment.

Together, the government and private investors will finance renewable energy projects in small businesses and private households in 13 developing countries.

Finally, why does a bank CEO spend time thinking about green growth?

First, because it’s an exciting business opportunity. Climate change and energy usage are becoming ever more important topics for our clients. And if we perform on this crucial front for our clients, we will also perform for our shareholders. My aim is to keep Deutsche Bank at the forefront of green growth.

Second, because we can all play a part in using energy responsibly. Our goal is for Deutsche Bank to be carbon neutral by 2012.
The challenge is huge. So is the opportunity. We can transform the way we use energy — in our companies, our cars, our homes and elsewhere.

We can create new industries. We can create new jobs. We can safeguard and even increase the independence and security of our nations in questions relating to energy supply. The costs of this transformation are considerable. Investing $45 trillion, globally, by 2050 — that’s a big task. But the costs of doing nothing are much higher.

We in the financial industry must play our part. And it cannot be financed on bank balance sheets alone. We must come up with new ways of financing green growth. We can form alliances across banking, insurance and fund management to connect investors with innovators.

We can help connect government funding with private capital. And we must work with regulators, and each other, to develop efficient, transparent and robust energy trading markets around the world.

We will only succeed if we work together: Nations must collaborate with each other. The public sector and the private sector must work together. We must share the burden of financial commitments. We must share the risks. But above all, let us share a vision of the mutual benefits of succeeding. This really could be a second industrial revolution.

Editor’s Note: This essay has been adapted from Josef Ackermann’s speech at the Global Metro Summit in Chicago on December 7-8, 2010.

There is huge potential for private investment in green growth — if we create the right environment for investors.

The United States has the potential to be a winner in energy technology. But to do that, it must make bold decisions and commitments — and soon, so as to avoid falling behind.

I have strong faith in the entrepreneurial and innovative spirit of this great nation. But make no mistake: A new world order is emerging.

We will only succeed if we work together: Nations must collaborate with each other. The public sector and the private sector must work together.

Domestic capital markets in some nations are still underdeveloped — and some do not cater for inflows of foreign capital.

There is huge potential for private investment in green growth — if we create the right environment for investors.

The United States has the potential to be a winner in energy technology. But to do that, it must make bold decisions and commitments — and soon, so as to avoid falling behind.

I have strong faith in the entrepreneurial and innovative spirit of this great nation. But make no mistake: A new world order is emerging.

We will only succeed if we work together: Nations must collaborate with each other. The public sector and the private sector must work together.

Domestic capital markets in some nations are still underdeveloped — and some do not cater for inflows of foreign capital.

The Future of Urban Development