Eastern Uganda: Back to School

With the end of LRA rebel attacks in Uganda, life has returned to normal for kids like Dan Opiding. 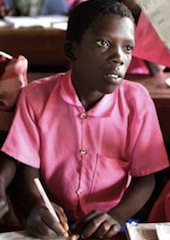 Credit: Kieran Dodds for The Globalist and The Other Hundred

Dan Opiding, age 12 when these photos were captured, lives in Ogongora village in Amuria district near Soroti in Uganda. The region was the site of extensive attacks by the Lord’s Resistance Army militant group and other raiders from 2003 to about 2007. Once-empty villages are now filled with people again.

Dan is the sixth of eight children. His father died of malaria when he was six. When not at school, Dan helps his mother, Grace, 40, with farming, household chores and looking after his siblings.

After falling ill and missing most of his exams at the end of one school year, Dan failed to make it to primary seven. If he can pass his exams next time round, he will be able to start six years of secondary education, assuming his family can afford the cost of his uniform and fees.

In the photos below, photographer Kieran Dodds — in a selection from the book The Other Hundred shows part of Dan’s daily routine.

Above: Walking to school in the morning. Dan’s home is 15 minutes’ walk from his school.

Dan’s story is that of a typical Ugandan child. He lives in a village. He studies at primary school. He has many siblings and helps his mother tend them while also working on farming and house building. His story is now typical of the millions in sub-saharan Africa who have seen their futures brighten in recent years, and is therefore extraordinary.

Above: Dan Opiding (in blue shorts) partakes in prayers before the school day begins.

At eight o’clock each morning, the students sing the national anthem and say prayers. Their teacher checks that their clothes and finger nails are clean, and that they have combed their hair. Classes start at half-past eight.

Dan Opiding cleans the classroom before the day of school begins in Ogongora village, Uganda. When he gets to school each day, Dan’s first task is to help clean its yard and his classroom.

Dan Opiding enjoys studying at school in Ogongora village, Uganda. Education at his school is free. However, the pupils must turn up wearing a clean, unripped uniform and with the books they need — a condition that prevents the poorest children in his village from attending.

Starting all over again the next morning, Dan Opiding dresses for school once more. Usually, he goes to school six days a week.

Kieran Dodds (UK) studied zoology before becoming a professional photographer. His work considers the role of the environment in human identity and culture, focusing on the the beauty of the world and the suffering that pervades it.

In these photos from @TheOther100, photographer Kieran Dodds shows the daily routine of a 12-year-old Ugandan student.

Dan lives in a typical Ugandan village. He studies at primary school. He has many siblings and helps his mother.

Education is free. But the pupils must be able to afford to provide a clean, unripped uniform and their books.

In these photos from @TheOther100, photographer Kieran Dodds shows the daily routine of a 12-year-old Ugandan student.

Dan lives in a typical Ugandan village. He studies at primary school. He has many siblings and helps his mother.

Education is free. But the pupils must be able to afford to provide a clean, unripped uniform and their books.

Multi-Stakeholder Negotiations in the 21st Century