The Ancient Silk Road: What and Where It Was

A network that once carried gems, spices and silk now carries electronics. 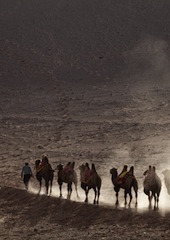 1. The Silk Road was never a single road. It was a web of paths travelled by caravans of horses and camels.

2. The Silk Road began around 120 B.C., when Xi’an in west-central China was the country’s capital. Xi’an is best known for the terra cotta warriors.

3. The caravans started out from the deserts of western China and continued through mountains along China’s borders with what are now Kazakhstan and Kyrgyzstan.

4. The journey crossed the sparsely populated steppes of Central Asia to the Caspian Sea and beyond.

5. The routes of the Silk Road flourished throughout the European Dark Ages and the early medieval period in Europe.

6. In the 1300s and 1400s, maritime navigation expanded, China’s political center shifted to Beijing and economic activities shifted to the coast. The Silk Road fell into disuse.

7. Recently, the Silk Road has been rediscovered. International companies such as Hewlett-Packard use the railway from Chongqing to ship computers and accessories westward to Duisburg, Germany.

The Silk Road has been reinvented by multinational electronics firms to ship goods from China to Europe.

The Silk Road has been reinvented by multinational electronics firms to ship goods from China to Europe.

Ukraine: This Time Is Different