Why the average German is the main loser in the Eurozone. 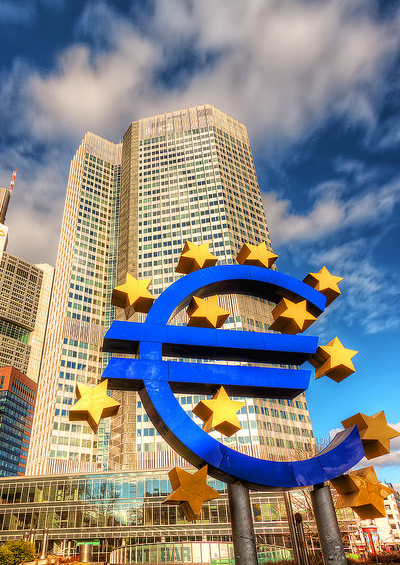 It is widely assumed that Germany is the main beneficiary of the introduction of the euro 15 years ago.

I beg to differ. The main loser of the introduction of the euro is the average German.

The only winner in Germany is the small group of owners of export-oriented companies. Shareholders in these companies benefited from wage restriction and hence, over time, from the cost advantage compared to their competitors in other Eurozone countries.

These economic facts of life make one thing clear: Those benefitting are not those paying the bills in the end. The average German citizen will end up paying for the euro experiment.

Viewed in a broader context, here is why the euro has ultimately led to the deterioration of Germany’s wealth and economic power, not to an improvement:

1. German consumers benefitted in the years before the introduction of the euro from regular devaluations in other European countries. Imported goods and holidays became cheaper.

Since the year 2000, imports from the Eurozone have become significantly more expensive, lowering the purchasing power of the German consumer and accordingly their standard of living.

2. Before the euro’s launch, at the time of the deutschmark, German industry was under constant pressure from regular currency appreciation compared to the currencies of its main trading partners, the French Franc, the Italian Lira and the U.S. Dollar. As a consequence, German industry was forced to improve its productivity every year.

Indeed, productivity growth was higher before the introduction of the euro than afterwards. Since the year 2000, Germany has been lagging behind most industrialized countries, including crisis countries such as Spain.

3. Accordingly, GDP per capita grew less in Germany than in the years before the introduction of the euro. A comparison with the performance of the Swiss economy makes this obvious.

While Germany showed growth rates of productivity and GDP per capita in the same range as the Swiss in the years before the euro introduction, the Swiss have hovered on while Germany has fallen behind. Germany has focused on producing cheaper, not better, which will undermine its long-term performance.

4. In the first years of the euro, all other countries benefitted from cheaper financing thanks to lower interest rates. Germany did not have this additional benefit. Due to the debt-fuelled boom in today’s crisis countries of Europe, the interest rates were too high for Germany and too low for the rest of Europe.

As a result, Germany fell into a long recession leading to high unemployment, forcing the government to introduce labor market reforms leading to lower wages. Overall, real wages in Germany stagnated for more than 10 years.

5. In order to revitalize its economy, Germany focused on regaining its competitiveness, but did so with a focus on cost, not productivity. The stagnation of wages dampened domestic demand and tax receipts, but allowed German exports to grow.

6. German companies – by no means synonymous with Germany as a whole — benefitted from lower wages and the debt-fuelled boom in the other European countries. Exports soared as demand for German products grew.

It is important to acknowledge the two aspects of this development:

First, cheap money led to a construction and consumption boom in several European countries which means, by definition, that these countries have an excess demand for credit and goods from abroad. Second, these goods and also the financing could have come from anywhere.

Given the crisis in Germany and the strategy of wage restriction, German companies became more competitive and therefore benefited from this demand.

It is important to note that it was the owners of the exporting companies – in the case of listed stocks mainly foreigners, as the German public has a low exposure to the stock market – who benefitted most.

The employees of these companies were the second group to benefit from having a job, but they did so without the benefit of higher wages. On the other hand, jobs in domestically oriented industries were lost due to low demand.

7. Due to the slow recovery of the German economy after the shock of the euro introduction, tax receipts were low. Given the ongoing financial burden of integrating East Germany, the government cut back on domestic investments, leading to an ongoing deterioration of infrastructure. The result was even more depressed domestic demand.

8. Running a trade surplus means simultaneously exporting capital into the world. The unused German savings were invested abroad, partly to fund direct investments, mainly to give credit to those who consumed more. As a result, German banks lost significant amounts in the U.S. subprime debacle.

Estimates are in the range of €400-600 billion of losses from poor investments abroad – not exactly a benefit from the euro’s launch. When the crisis became obvious, German banks reduced their exposure to the countries of the European periphery. They did so by either selling out their holdings to public creditors or reducing their credit.

As a result, the German private sector – after having extended generous credit to today`s crisis countries – has now reduced this exposure. But it has done so at the cost of the German public sector stepping in with direct and indirect loans and guarantees.

9. Given the overhang of bad debt in Europe – according to my estimates at minimum three trillion euros – there is no doubt that Germany, as the main creditor, will end up taking a significant part of these losses.

The question still remains open how these losses will be realized, either by open default, a debt restructuring or monetization of debt by the ECB. The main burden would in all cases fall on the average German citizen.

10. Meanwhile, the efforts to stabilize the Eurozone have led to low interest rates, which lower returns for ordinary savers. The weak euro might benefit the German export industry once again. However, it will also increase the cost of imported goods while lowering the positive impact of lower oil prices.

For the average German, the situation can be summed up as follows: Due to the introduction of the euro, Germany experienced a long period of sub-par growth, high unemployment and wage stagnation. The days of cheap holidays in Italy and Greece were over.

The government had to cut spending on infrastructure and social welfare. Meanwhile, industry focused on exports, as excess German savings were used to give cheap trade financing to its export industries.

Now, the debtors cannot pay back their loans and the German savers and taxpayers will end up with the bill. In addition, Germans are blamed for the economic hardship of the crisis countries.

Hardly proof for the claim that Germany was the main beneficiary of the euro. Without the euro, the debt bubble in southern Europe would not have happened. And although Germany would not have had export surpluses of this magnitude, it would have a better living standard and superior infrastructure.

Important changes must be made

In spite of these obvious facts, German economists, politicians and lobbyists continue to advertise for more German solidarity in the crisis of the Eurozone. Why? Politicians want to hide these facts, which would become obvious once the euro experiment ends.

They continue to play pretend and hope. Lobbyists want to protect the interests of the export-oriented companies, which indeed benefit from the euro and the strategy of wage suppression. Economists continue to support a failed strategy as lobbyists and politicians pay them.

The main loser of the introduction of the euro is the average German.

The only winner in Germany is the small group of owners of export-oriented companies.

Germany focused on regaining its competitiveness with a focus on cost, not productivity.

The euro forced Germany to adjust its economy by lowering wages.

As Europe's main creditor, Germany will end up taking a significant part of losses from bad debt.

The main loser of the introduction of the euro is the average German.

The only winner in Germany is the small group of owners of export-oriented companies.

Germany focused on regaining its competitiveness with a focus on cost, not productivity.

The euro forced Germany to adjust its economy by lowering wages.

As Europe's main creditor, Germany will end up taking a significant part of losses from bad debt.

Tone Down the “Winners and Losers” Talk on Cuba