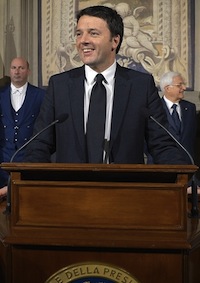 Europe is looking to Italy. With Matteo Renzi, Italy finally gets the leader it desperately needs to get out of its 20 years of stagnation. And he seems ambitious enough to fulfill the high expectations — something he demonstrated again during a visit this week to Germany.

He wants to reform the election system and the political institutions (i.e. more efficient processes of governance and clearer majorities in parliament), and reform the labor market (meaning easier hiring and firing. Next, he wants to reduce bureaucracy and red tape and, in May, implement tax reform.

Mr. Renzi’s promises after his election to the post of prime minister are quite ambitious but very necessary to safeguard Italy’s future.

Italy needs fundamental and radical reforms to overcome an economic crisis worse than the recession the country experienced in the 1930s.

Italy’s industry has lost competitiveness due to rising labor costs over the past ten years. These can no longer be countered by devaluation of the currency, as was the case in pre-euro times. The political system has proven unable to react and all efforts to stabilize the government debt have failed, as the growth rate of the economy was minimal.

Without growth, it is impossible to get a handle on Italy’s large government debt. Therefore, one can only hope that Matteo Renzi will indeed be able to implement the reforms he announced. Italy needs him to be successful.

How about Germany’s stagnation?

We Germans tend to look down at the crisis countries of Europe. We think to ourselves that we showed the others how to do reforms to get back on track. We worked our way out of the hole of being the sick man of Europe. That’s why we do so well today. The other European countries should follow our example and then they will do as well as we do.

Unfortunately this is an arrogant attitude – and highly problematic. As Peter Drucker used to define it: “arrogance means to be proud of one’s own ignorance.”

Germany can only claim to be an example if compared to the neighbors in Europe, many of which are quite weak.

In February 2014, Germany’s industrial production shrank by 0.6% and the economy grew by just 0.25% in the last quarter of 2013. Pretty poor data for the “strong man” of Europe.

Germany also faces structurally significant challenges. The new energy policy focusing on renewable energy like wind and sun power and shutting down all nuclear power plants will cost the German economy up to 1 trillion euros.

Supporting the euro and the weaker countries of Europe will cost another trillion. In addition, Germany faces one of the worst demographic challenges of the western world. In 2050, 100 workers active in the labor market will have to support 57 retired people. This compares to 30 today.

True, this ratio is better than in Italy (62), but much worse than France (43) and the UK (40). Already in 2009, the unfunded liabilities of the German government for the costs of the aging society were estimated to amount to 400% of BIP.

That is much more than the official government debt of 80% – and more than Italy’s unfunded liabilities of 250% (due to Germany’s more generous social welfare).

Moreover, the recent decisions by the new German government to reduce the retirement age to 63 (from 67 years) and to pay additional pensions to mothers will increase the financial burden by another 200 billion euros.

How Germany must change

Germany is in desperate need for its own Matteo Renzi to prepare the country for the upcoming challenges and to defend the high standard of living. Of course, the program required in Germany would not be the same as in Italy, but not so dissimilar in its depth.

The German parliament with 631 members is far too big and its size could easily be reduced by 50%. Up to now, all efforts to reduce the size of the parliament failed to get the support – from the members of parliament. It is like asking the frogs as to whether we should dry out the wetlands.

Clarifying and simplifying the role split between the central government and the different German Bundesländer – similar to states in the United States may not sound particularly sexy. But it would surely reduce bureaucracy and facilitate decision making.

Germany should also reduce the number of its states. A country with high debt levels and a shrinking population cannot afford so many subcritical entities. The current system leads to significant differences between states, notably in the education sector.

Quality and performance levels differ so much that, when a family moves from Bremen to Bavaria, this can seriously disrupt a child’s education.

Instead of building on the success of the labor market reforms by the government of Gerhard Schröder, the new government is implementing a minimum wage. This will prove to be too high for the lower productivity regions of the former East Germany. That, in turn, reinforces unemployment and migration from the eastern parts of Germany, which is the last thing these regions need.

Given the demographic development, Germany needs to attract qualified immigration from outside. Instead of supporting these efforts and making Germany more open to immigration, the political parties campaign with anti-immigration slogans in the upcoming elections to the European parliament.

Reforming public services like Matteo Renzi is envisioning for Italy would be beneficial in Germany as well. Especially in light of the demographic development, Germany cannot afford to utilize such a big part of its workforce to redistribute wealth – instead of generating wealth.

Given intense international competition and a rapidly aging and shrinking population, Germany needs to be managed for maximum efficiency.

Perversely, but logically by the lights of their own trade, Germany’s politicians focus on the other side of the equation: the majority of voters is old. That’s why more money is spend on consumption (for the aging) instead of investments (which would benefit the young).

This makes it difficult for political leaders to do what is necessary for the long-term wellbeing of the country. Germany will get its own version of Matteo Renzi – but only when there will be no other way out. And as in the case of Italy, the question will be: Is it too late?

Germany is in desperate need of its own Matteo Renzi to prepare the country for the upcoming challenges.

Reforming public services like Matteo Renzi is envisioning for Italy would be beneficial in Germany as well.

Germany has too many states and too many MPs. Getting them to change that is like asking frogs to dry out wetlands.

Germany is in desperate need of its own Matteo Renzi to prepare the country for the upcoming challenges.

Reforming public services like Matteo Renzi is envisioning for Italy would be beneficial in Germany as well.

Germany has too many states and too many MPs. Getting them to change that is like asking frogs to dry out wetlands.

Spain May Have to Reset Its Culinary Clock