What can the world learn about global governance from the diplomatic model of the European Union?

What can the world learn about global governance from the diplomatic model of the European Union? 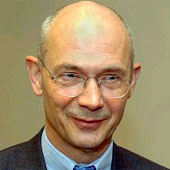 Pascal Lamy was the director-general of the World Trade Organization from 2005 to 2013.

The end of the Cold War caught everyone by surprise. It was the end of a bipolar world. A new world order was being born. And yet, there was not enough thinking and discussion about its governance structures.

Post-1989, there was never a Bretton Woods Conference or a San Francisco Conference. As a result, global governance structures did not adjust.

And here lies the root of many of today’s problems. Global challenges need global solutions — and these can only come with the right form of global governance, which today, 20 years later, remains too weak.

The world is in a state of serious distress. We are in the midst of the worst-ever economic crisis — and the first to have a global reach and which has seen a decimation of employment.

We are seeing our planet deteriorate due to global warming. We see droughts and violent floods. We see entire islands disappearing under water. And we see nuclear proliferation, which poses a serious threat to world peace and security.

As we wonder what went wrong and search for urgent solutions, there is a place on earth where new forms of global governance have been tried following World War II — in Europe.

It was more than half a century ago that the Frenchman Jean Monet, one of the shapers of post-war Europe, said, “The sovereign nations of the past can no longer provide a framework for the resolution of our present problems. And the European Community itself is no more than a step towards the organizational forms of tomorrow’s world.” His assessment was as valid then as it is now.

What is global governance? For me, global governance describes the system we set up to assist human society to achieve its common purpose in a sustainable manner — that is, with equity and justice.

Growing interdependence requires that our laws, our social norms and values, our mechanisms for framing human behavior be examined, debated, understood and operated together as coherently as possible. This is what would provide the basis for effective sustainable development in its economic, social and environmental dimensions.

Whether public or private, governance needs to provide leadership, the incarnation of vision, of political energy, of drive.

It also needs to provide legitimacy, which is essential to ensure ownership over decisions which lead to change — ownership to prevent the built-in bias towards resistance to modifying the status quo.

A legitimate governance system must also ensure efficiency. It must bring about results for the benefit of the people.

Finally, a governance system must be coherent. Compromises would need to be found over objectives which often may contradict one another. It cannot be about the right hand not knowing what the left hand is doing. Or, even worse, it cannot be about knowingly moving them in different directions.

As with any system of power within the nation-state, what is needed is “good” global governance — a system which offers a good balance between leadership, efficiency and legitimacy, and which ensures coherence.

What then are the specific challenges of global governance?

The first challenge stems from the difficulty in identifying leadership. Who is the leader? Should it be a superpower? A gathering of national leaders? Selected by whom? Or should it be an international organization?

Under the classical framework of legitimacy, citizens choose their representatives collectively, by voting for them. It also relies on the political capacity of the system to bring forward public discourse and proposals that produce coherent majorities and provide citizens with the feeling they are participating in a debate.

Since legitimacy depends on the closeness of the relationship between the individual and the decision-making process, the challenge of global governance is distance. The other legitimacy challenges are the so-called democratic deficit and accountability deficit, which arise when there are no means for individuals to challenge international decision-making.

In sum, the specific challenge of legitimacy in global governance is to deal with the perceived too-distant, non-accountable and non-directly challengeable decision-making at the international level.

Handling global problems using traditional domestic democracy models has important limitations. And yet, the very credibility of domestic democracies is at risk if global governance does not find its own democratic credentials — or if citizens feel that the issues that affect them daily cannot be adequately dealt with.

I realize that, in these troubled times for the European Union, it is no easy matter to present it as a new paradigm of global governance. And yet, the European construction is the most ambitious experiment to date in supranational governance. It is the story of a desired, defined and organized interdependence between its member states.

What marks the essence of the European governance paradigm is the coming together of a political will, a goal to be attained as well as an institutional set-up. It is the combination of these three elements — and not the specific method of governance used. Not that we should underestimate the technological leap forward in the building of Europe.

I have often likened governance systems to the three states of mass. The national level, in my view, represents the solid state. The international system is more like the gaseous mass. And in between these lies the European integration process, in a kind of liquid state.

Whichever the state of the mass, what is required to have a governance system work is a combination of political will, capacity to decide and accountability. In this respect, European integration provides us with many useful lessons for global governance.

The first one is that institutions alone cannot do the trick. Neither can political will without a clearly defined common project. Nor can a well-thought-through common project deliver results — if there is no institutional machinery. The reality is that we need the three elements together to create an integration dynamic.

But even if these three elements are there, there is a risk that a real or perceived legitimacy problem remains, creating a glass ceiling for further integration. The reality is that supranational institutions, and the European Union is one, require a long-term investment.

And this is often incompatible with the short-term attention span of many of its leaders, who are often elected on thin majorities — or with fragile coalitions. Global legitimacy requires long-term care and attention.

Another lesson I would draw for global governance is that of respect for the principle of subsidiarity. It is about performing functions at the level where these are more effectively carried.

In his recent encyclical letter, “Caritas in Veritae,” Pope Benedict XVI argues that “the governance of globalization must be marked by subsidiarity, articulated into several layers and involving different levels that can work together.

“Globalization certainly requires authority, insofar as it poses the problem of a global common good that needs to be pursued. This authority, however, must be organized in a subsidiary and stratified way, if it is not to infringe upon freedom and if it is to yield effective results in practice.”

In other words, the international system should not be overburdened with issues which are better dealt with at the local, regional or national level.

The final lesson I would draw is that, since the political “demos” remains essentially national, legitimacy would be greatly enhanced if international issues become part of the domestic political debate. The exercise of democracy at the national level needs to integrate an international dimension to foster legitimacy at the global level.

The fact that in an organization like the World Trade Organization, decisions are taken by consensus and where each country has one vote may not be enough to create a sense of legitimacy in the actions of the organization. More is required.

National actors — political parties, civil society, parliaments and citizens — need to ensure that issues which are part of the “global level” are discussed at the “domestic level.”

In the longer term, we should have both the G20 and the international agencies reporting to the “parliament” of the United Nations. In this respect, a revamping of the UN Economic and Social Council could lend support to the recent resolution adopted by the UN General Assembly on a UN-system-wide coherence.

This would constitute a potent mix of leadership, inclusiveness and action to ensure coherent and effective global governance. With time, the G20 could even be a response to the reform of the UN Security Council.

But a structure of this type cannot be an empty vessel. It needs to be underpinned by a set of core principles and values.

And this is precisely what German Chancellor Angela Merkel has proposed with the creation of a Charter for Sustainable Economic Activity. It is a commendable effort to provide a “new global economic contract,” to anchor economic globalization on a bedrock of ethical principles and values which would renew the trust that citizens need to have that globalization can indeed work for them.

Editor’s Note: This article has been adapted from WTO Director-General Pascal Lamy’s speech at Bocconi University in Milan on November 9, 2009.

We have to deal with the perceived too-distant, non-accountable and non-directly challengeable decision-making at the international level.

The European Union is the story of a desired, defined and organized interdependence between states.

A legitimate governance system must ensure efficiency — by bringing about results for the benefit of the people.

Global governance describes the system we set up to assist human society to achieve its common purpose in a sustainable manner.

The challenge of global governance is distance — as legitimacy depends on closeness of the relationship between the individual and the decision-making process.

Pascal Lamy was the director-general of the World Trade Organization from 2005 to 2013.

We have to deal with the perceived too-distant, non-accountable and non-directly challengeable decision-making at the international level.

The European Union is the story of a desired, defined and organized interdependence between states.

A legitimate governance system must ensure efficiency — by bringing about results for the benefit of the people.

Global governance describes the system we set up to assist human society to achieve its common purpose in a sustainable manner.

The challenge of global governance is distance — as legitimacy depends on closeness of the relationship between the individual and the decision-making process.

The WTO as a Systemic Regulator?