Hillary Clinton and the Art of Defending American Power Linguistically

Why are even America’s self-acclaimed liberal internationalists still so keen on being top dog? Will John Kerry follow in Hillary Clinton’s footsteps on this issue? 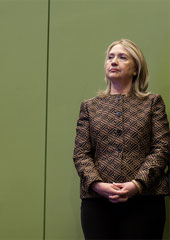 How about this for a new rule of power politics: When the defense of a nation’s world power status comes down to playing linguistic games, it — read: its power — is in jeopardy. But don’t tell that to Hillary Clinton and her advisors in the U.S. State Department.

They have gone to great lengths to engage in mental gymnastics to avoid the apparently unspeakable word of a “multipolar” world. Multipolar, to them, appears somehow antithetical to the entire nature and purpose of the United States.

Smart as they undoubtedly are, Clinton and her team, coming in after the war-mongering Bush Administration, did face a dilemma. On the one hand, they wanted to undertake a truthful assessment of U.S. power — lest they be intellectually dishonest.

On the other hand, they realized that they could only go so far, lest they be blamed vehemently by Republicans in the U.S. Congress for carrying the message of a decline in status.

How to square that circle? An elegant way out was devised: Let’s just call this world of ours a “multipartner” world.

What, you might wonder, was the point of creating this neologism to avoid the acknowledgment of a multipolar world?

The point was to preserve the claim of the exceptional character of American power — even if it was just a more or less linguistically based figment of one’s imagination.

The policy point to score was that the United States was “still the nation best placed to lead in that world.” What’s the point of engaging with the world outside, the Clinton team seemed to be saying, if the United States is no longer acknowledged as number one?

The Clinton team welcomed engagement with the outside world — but on the condition of acceptance of continued U.S. leadership.

At the core, this issue is about more than semantics or wishful thinking. It addresses the very roots of American power.

The idea underlying Hillary Clinton’s era as Secretary of State was bafflingly bold. America reins supreme because it is the nation that, by tradition and aspiration, best embodies Western values. And, by the way, Western values are very much seen as universal values.

Savor the arrogance: Western (meaning American) values are the universal values. This comes from a nation that prides itself on other occasions on its terrific relationship with Asia — and for its promotion of the interests of other dynamic nations, from the BRICs onward to other emerging markets.

When an Indian strategist pointedly asked Anne-Marie Slaughter (the architect of Clinton’s policy map during her years as the State Department’s Director of Policy Planning) whether Western values were synonymous with universal values, this was her point-blank answer: Universal values are not shaped by Asian values and concepts. In other words, “We own it, buddy.”

No wonder this self-revealingly undiplomatic remark drew an audible gasp from the Indians in the audience, supplemented by headshaking from the assembled Chinese and other Asians — and a knowing smile from the Europeans who were present.

This moment revealed a stunning insight about the Obama Administration and, by extension, the Democrats. In their own way, they are no less dedicated to the notion of American supremacy than the George W. Bush team before them.

To his great credit, the key exception to that constant choir of supremacy self-worship has been the President himself, with one forgivable exception, in his second inaugural address on January 21.

But particularly in the big foreign policy speeches he delivered abroad, he pointed consistently to the limitations of American power, in part to cause other regions to take their fate more into their own hands.

The 2012 U.S. presidential campaign has demonstrated once again the apparent appetite of the American people to hear acclamations of their own greatness. Either way, from Vice President Joe Biden and Hillary Clinton on down, administration officials have been very hesitant to expose the American people to the reality of a far more limited global influence.

Hiding that fundamental truth from the American people, insular as they are by nature and by force of geography, does them a disservice. Maintaining the myth of American exceptionalism and dominance is not what is required to help the American people become more realistic in their expectations.

It remains to be seen whether John Kerry, Hillary Clinton’s successor in the post of U.S. Secretary of State, will prove to be more down to earth in his approach to American “exceptionalism.”

On this one issue, more than anywhere else, the art of self-motivation versus the need for a realistic management of expectations at home and abroad comes into full focus.

It's all about preserving the claim of the exceptional character of American power — even if mostly linguistically.

The idea underlying Hillary Clinton's era as Secretary of State was bafflingly bold.

America supposedly reins supreme because it is the nation that best embodies Western values.

It's all about preserving the claim of the exceptional character of American power — even if mostly linguistically.

The idea underlying Hillary Clinton's era as Secretary of State was bafflingly bold.

America supposedly reins supreme because it is the nation that best embodies Western values.