The Frenchman Who Reshaped the IMF

Reflections on the work of Olivier Blanchard, the IMF’s now retired chief economist.

Reflections on the work of Olivier Blanchard, the IMF’s now retired chief economist. 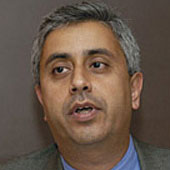 The IMF is often caricatured as an institution that wants to nail every problem with the hammer of austerity and structural reforms.

An article in TIME claimed that the IMF tends to “dish out roughly similar advice to all countries, no matter what their circumstances,” noting that a cursory look at the IMF’s website would show that “prudent fiscal policy and reforms” had been recommended to Lesotho, France and Russia.

Whatever the merits of the caricature, Olivier Blanchard, the French-born, former MIT economist who served as the IMF’s chief economist from September 2008 to September 2015, achieved a rare feat.

He not only changed perceptions of the institution both on the inside and the outside but also, even more crucially, managed to reshape IMF policies.

Under Blanchard’s watch, the IMF:

Even a famous critic of the institution agreed: “A recovery in aggregate demand is the single best cure … what a relief to hear the Fund say that,” Paul Krugman cooed about the thrust of IMF policy prescriptions during the Great Recession.

Olivier Blanchard also threw out some controversial ideas for discussion, such as: Should inflation targets be raised?

That idea ran into some predictable criticism (“if you flirt with inflation, you end up marrying it,” said a former German Bundesbank president).

But it also drew fire from friendly sources—Blanchard’s mentor and long-time collaborator Stan Fischer, currently the U.S. Fed Vice Chairman, thinks that a higher target would be a “mistake.”

Blanchard also nudged the IMF towards less doctrinaire positions on several other issues, notably on the use of capital controls during crises.

He thereby gave an impetus to a rethinking that had started after the Asian crisis of 1997-98—see my article for The Globalist entitled “The Vindication of Joe Stiglitz.”

The biggest change that Blanchard brought about was in the IMF’s advice on fiscal policies. This came in three steps:

This was in the October 2012 World Economic Outlook—and subsequent paper — where Blanchard and his colleague Daniel Leigh showed that “in advanced economies, stronger planned fiscal consolidation has been associated with lower growth than expected.”

Translation: the adverse impact of austerity on output was perhaps larger than had been expected.

The upshot of this work was not that fiscal consolidation should never be undertaken. Rather, it was that one should expect austerity to lower output.

Moreover, this effect could be greater in some circumstances (e.g., when monetary policy was constrained because policy interest rates could not be pushed below zero).

Here are three other areas where Blanchard left his imprint through his own writing, by guiding the work of others or by creating an open atmosphere where his staff could explore new pastures:

Blanchard presided over a series of papers by IMF staff that nudged the Fund towards a more flexible position on capital controls.

A December 2012 blog by Blanchard and Ostry “explains the logic and research that underpins the shift” in the Fund’s position.

In a paper with Giovanni Dell’Ariccia and Paolo Mauro, Olivier posed the question: “Should policymakers therefore aim for a higher target inflation rate in normal times, in order to increase the room for monetary policy to react to such shocks?”

Though the paper never explicitly advocated a new 4% target (that was done later by Larry Ball in an IMF working paper), and certainly not one to be adopted right away, this quickly became known as the “4 percent solution.”

The IMF has received a lot of credit for its work on inequality. The finding that captured attention — by Jonathan Ostry and Andy Berg — was that inequality was detrimental to sustained growth.

Blanchard initially regarded this finding as an interesting cross-section correlation and then as a correlation that had cleverly tapped into the zeitgeist.

It is only more recently, in his foreword to the April 2014 WEO, that Blanchard has come to the view that the implications of inequality for macroeconomic developments are a “central issue.”

IMF is seen as an institution that nails problems with the hammer of austerity and structural reforms.

Blanchard nudged IMF toward less doctrinaire positions on issues like the use of capital controls.

IMF is seen as an institution that nails problems with the hammer of austerity and structural reforms.

Blanchard nudged IMF toward less doctrinaire positions on issues like the use of capital controls.