Make in India! But Can India Make It? 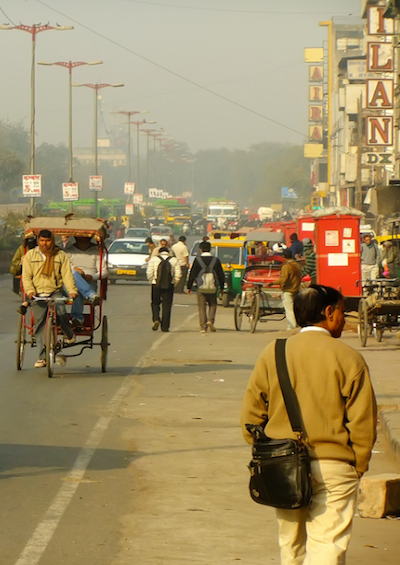 Editor’s note: To our great delight, the Modi government seems to be hearing our message about the very troubled Indian visa system. See “India announces new visa rules to boost tourism numbers.” If this pans out, experiences like the one described by our author below may — stress: may — become a memory of the past.

India is a country I know reasonably well. Although I have never lived there, I have been visiting regularly since 1960. Also, a quite high proportion of my closest friends are Indians, whether they still live there or are members of the extensive Indian diaspora.

I have also worked with various Indian institutions, including academia, NGOs, business and government. Finally, I have quite a fascination for Indian culture – perhaps 30% or more of my readings of contemporary literature are Indian authors.

In short, fundamentally I have great affection – and, in many respects, admiration for India.

I realize, of course, that India has its faults. Some are quite serious: The injustice of the caste system, violence against women, widespread corruption, terrible infrastructure, high and unacceptable levels of poverty, shocking rates of illiteracy. There are more illiterate women in India than in the rest of the world combined.

All this by way of preface to say that what follows is going to be considered by some as quite critical. However, as I know many Indians themselves will agree, this is also an incredibly frustrating society. After all, they are the ones to experience most of the first-hand fallout from that in their daily lives.

Getting by without a little help from their friends?

What I can, want to and need to add to this debate is this: India has long had a habit, quite singular in the world, to make it very hard on the true friends of India abroad to remain friends (and not give up in complete frustration on their attempts to reach out and/or visit).

The immediate context in which this article was written is what readers who are regular foreign travelers to India will recognize as “PIVASS” or the “POST-INDIAN-VISA-APPLICATION-STRESS-SYNDROME.”

I, for one, have gone through this ritual annually, but the experience hasn’t got better the more often one succumbs to its tentacles.

In fact, this year was one of the worst.

Given my background with India, my position as a visiting professor in India and current emeritus professor of a globally respected institution, IMD in Switzerland, what I am trying to accomplish on these visits is something presumably considered quite worthy of support by Indian authorities.

I am trying to teach and advise Indian youth on global transformations, challenges and implications for India.

To get all the papers filled out and answer all the – at times – incredible questions requires huge effort and time.

This time, all this was dutifully done and everything was in order:

1. My passport is still valid for ten years.

2. My airline tickets in and out are confirmed.

3. The letter of invitation from the President of the University where I am visiting professor was provided.

With all that in hand and humbly submitted, I should have been sailing smoothly through the visa application process, right? After all, I am quite a regular. And while I am not an investor myself, I teach and advise business leaders. That should make me a good representative of the FOIs (friends of India).

Also, as is advised, I submitted my visa application more than two weeks before my departure date.

Smooth sailing? Well, no. I received a very distressed e-mail from my assistant to say that the application had been rejected.

What to do? I had already set up numerous meetings for my forthcoming visit to India, had taken on a number of teaching commitments – and had to fit it all into a complex travel schedule that would also take me to other places in Asia beyond India.

Of course, I sent an e-mail protesting the visa rejection, knowing that would be to no avail. So I contacted a prominent Indian government official friend to intervene on my behalf – which he promptly did and soon after I got the one-year multiple entry visa I had applied for in the first place.

The grounds for the rejection, as it turned out, had been entirely based on a mistake made by the consular officials.

Lest you think this was a singular mishap, I have to tell you that I have gone through a similarly hiccupped process in previous years. And, I have no doubt – unless things change fundamentally – I may have to go through it in future years.

If, that is, I continue going to India. As I wrote to the consular officials, life is short in general – and gets much shorter at my age. (I am emeritus, after all!) I can do without this hassle and stress.

Of course, “PIVASS” is a syndrome that appears in many facets of Indian life, notably in the so-called License Raj! Petty bureaucratic harassment is as Indian as poppadoms.

This systemic inefficiency and penchant for administrative messes reflect much of the corruption, lethargy, inefficiency, poverty, economic underperformance and social injustice that mar India today — and gravely undermine its future potential.

It also explains why India, the size of its vast market notwithstanding, is not the prized destination for foreign investment that it should be.

Prime Minister Modi wants things to change. A recent issue of The Economist noted that Mr. Modi wants better performance: “He says a more welcoming bureaucracy — even, if you can imagine it, in visa offices — will encourage investors. The prime minister wants India to be among the top 50 in the World Bank’s ‘ease of doing business’ index. It is currently 134th.”

The tendency to present itself as a bureaucratic nightmare to anyone who tries to go beyond the steady drip of news reports about Indian inefficiency also has another stark outcome: It unfailingly presents India as a closed country.

Instead of offering a welcome mat, one is greeted with the equivalent of a scowl. It is extraordinary that a country that has some of the greatest global minds and truly global intellectual clout should have such petty, narrow-minded officials as the Indian face to the outside world.

Beyond another glib ad campaign

To that end, there is a new campaign: MAKE IN INDIA.

That is all reasonable enough – and is certainly something that India should go after with great resolve.

However, grave doubts are in order. As long as there is PIVASS, the chances of the Make-in-India campaign succeeding are nil.

This matters greatly. Soon, India will become the most populated country in the world, with a total populace of 1.6 billion! Unlike China and other East Asian countries that have rapidly aging populations, India has a huge demographic dividend.

India is an old civilization, but equipped with a very young population. Some 100-million jobs need to be created over the next decade. If the Make-in-India campaign collapses, as it most likely will, IF PIVASS prevails, it will be the young sick man of the global economy.

India has a tremendous amount to contribute to the planet. Conversely, if that potential remains just that – potential – because it fails to materialize, then the whole planet will suffer the consequences.

And that is why I – and The Globalist – jumped into this debate. We are gratified to see that the Modi government has now acted — within just four days of Stephan Richter writing about this in The Hindu. This is very encouraging, if properly executed.

The stakes are very high, indeed. If India continues to be an underperformer, with chaotic governance and social injustice, it is not just India that will suffer, although Indians – and especially the vast young generation – will clearly suffer the most.

Mr. Modi, you know what’s at stake. You have taken a first step to make sure the petty-minded bureaucrats have been made to realize how much is at stake. Many more steps must follow to secure India’s global future.

If India persists in chaotic governance and social injustice, it is not just India that will suffer.

Despite the size of its market, India is not the destination for foreign investment that it should be.

As long as one is greeted with the equivalent of a scowl, the chances of the Make-In-India campaign succeeding are nil.

If India persists in chaotic governance and social injustice, it is not just India that will suffer.

Despite the size of its market, India is not the destination for foreign investment that it should be.

As long as one is greeted with the equivalent of a scowl, the chances of the Make-In-India campaign succeeding are nil.

Cameron To Europe: Don’t Come Here Unless You Have a Job