A double take on economic planning and dynamism in India. 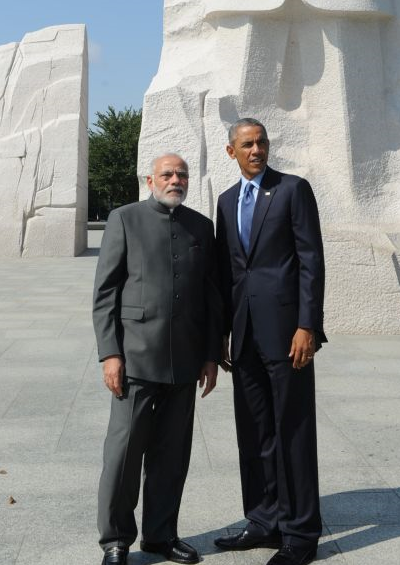 After all the hoopla and excitement of the Obama/Modi visit, it’s high time for a reality check on the real hurdles India faces, despite the announcements professing a new powerful partnership brought about by the visit.

Wrapping up a trip to India, with some rupee bills left in my pocket, I stopped by the airport bookstore. With their generally very rich offerings and low prices (no thanks to Amazon), bookstores are one of the delights of India.

In a rush to get to my departure gate, I scanned the bookshelves quickly and was glad to find a suitable title: “India 2020: A Vision for the New Millennium.”

It looked like just the book to buy in order to see how Indians, amidst all the Modi hoopla, are planning to get their country on the road for a brighter economic future. I quickly flipped through the pages – and decided to use up my remaining 500 rupee note (=$3).

Of course, I should have known the error in my ways. Who can seriously publish a strategy to remake an entire country by 2020? That doesn’t allow for a lot of time to execute the plan.

In my own defense, I can only say that Prime Minister Narendra Modi surely knows that he has no time to waste. Dynamism on economic reform is his overriding mantra.

Cracking the book open as soon as we were airborne, I soon discovered that the book, authored by A.P.J. Abdul Kalam, a former President of India, had been published back in 1998 – soon to be two decades ago.

Even so, reading the book turned out to be a valuable exercise. For starters, the book felt very apropos in listing and detailing all the challenges India faces today.

For example, the book powerfully recites a minister’s comment that there are three classes of Indians – those who have ample access to fresh clean water, those that have it very intermittently – and those who never have it. That is still very true today.

The book’s various chapters address pertinent agenda items such as “Manufacturing for the Future,” “Technology Vision 2020,” “Health Care for All” and “The Enabling Infrastructure,” as well as the ever-green question of “Can India Become a Developed Country?”

The 300-plus page book, just like any good study, also contains a whole lot of tables and figures to detail the status of the problems, the goals and the means to get there.

And it had relied on the wisdom of many eminent Indians as chairpersons to spearhead the various task-forces established for the preparation of the study.

Impressive as the tome was (and still is), there is just one problem. Given the 1998 publishing date, obviously very little of what was laid out in the form of a solid national agenda back then has actually been accomplished since.

And therein lies a deeper message. A key part of the problem is the immensity of the task. Doing strategic planning in India is a daring act mainly for two reasons:

First, the endlessly complex Indian landscape, politically, ethnically, culturally and so forth.

Second, India also has to contend with backwardness in so many places that achieving real progress is a task that boggles the mind. It is said with good reason that India lives simultaneously in the 16th century and the 21st.

But for all its human talent and enormous human energy, achieving a real structural step forward in a nation that will soon have 1.6 billion people basically defies imagination.

China, a “tanker” of similar population size, benefitted from its top-down approach – but even given that, one finds a whole lot of confusion, overlap and lack of coordination there.

No doubt, with his personal dynamism, determination and track record, Prime Minister Modi is India’s best shot at making progress. All of these personal qualities were on ample display during Republic Day, which this year included U.S. President Barack Obama as a special guest.

However, since independence, India has never suffered from a lack of planning. In fact, the planning dimension has perhaps been its defining feature since the days of Nehru. What has been in short supply by comparison is the ability to execute.

The comparison to the U.S. economy is instructive in this regard. Both countries feature a very litigious business culture, which can impair meaningful progress – only in India’s case the impairment is much starker still.

Support from the United States

Both countries also have strong federal systems, with states jealously protecting their independence and relative autonomy. That, too, makes the execution of sweeping national visions, no matter how necessary or well thought out, more difficult.

But all those who worry with good reason about the effects of political gridlock on the economic performance of the United States should take a look at India. The United States, with all the vested interests it has, is easily malleable virgin territory by comparison.

Mr. Modi is certainly aware of all that. His hope is that U.S. investors will seize the investment opportunity and help remake/modernize India.

He should think again. One current pet peeve of large U.S. corporations, as evidenced by both the ongoing TPP and TTIP negotiations, is the investor-state dispute settlement mechanism.

Given that India’s courts are notorious on being decades behind on the settlement of land disputes large and small, that simply does not augur well for U.S. engagement — or that of other major nations, except perhaps China.

The latter outcome, however, flies in the face of the strategic rapprochement that the United States and India are seeking to perform right now, including the progress achieved during the Obama visit.

Prime Minister Narendra Modi surely knows that he has no time to waste in remaking India.

Doing strategic planning in India is daring because of the endlessly complex Indian landscape.

India has to contend with backwardness in so many places that achieving real progress is a formidable task.

Prime Minister Narendra Modi surely knows that he has no time to waste in remaking India.

Doing strategic planning in India is daring because of the endlessly complex Indian landscape.

India has to contend with backwardness in so many places that achieving real progress is a formidable task.