Why is the U.S. president so keen on excelling by doing his very own opposition’s bidding? Is it because he is a non-politician and utter elitist? 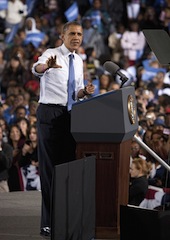 Oh, can you count the ways? Never mind that he had advertised himself in the 2008 presidential campaign as a professor of constitutional law.

We all know by now that this is just one among the many qualification boxes he ticked off in order to secure his eventual rise.

And forget about his principled utterances as a presidential candidate about having reservations about clandestine monitoring programs being conducted on U.S. citizens.

People are used to politicians fidgeting with the truth to seek higher office.

What is far more disconcerting is the utter political tone deafness of Obama, the (presumed) politician. Now, he has grandiosely okayed a fundamental invasion of privacy.

His circuitous reasoning may have been not to be seen as weak by his political opponents. But by now, his fundamental flaw as a politician has been firmly established.

As has happened so many times before on other issues, he excels by doing his very own opposition’s bidding. Talk about disarming yourself.

This notion of self-disarmament even applies by Mr. Obama’s own logic.

If, as the U.S. President argues ex post facto, it was ok on balance to have this monitoring process put in place, why not have that discussion with the American people in broad daylight right after he took office?

That path would have allowed him to be both principled and a leader.

Instead, Mr. Obama increasingly looks like a hapless tool drifting in the political seas. He is excelling mostly by doing the political hatchet jobs his fiercest political opponents are otherwise known for.

In addition, he brings a very patrician bearing to the job à la: “We know best what’s best for you, the American people. Let’s not worry about the details.”

Imagine the chutzpah: The country that is holding itself out globally as the beacon of individual rights and transparency acts in a manner that’s anything but.

The Harvard Law School driven government is counting on the docility of the American people.

The recent scandal is about far more than Mr. Obama, yet again irritating his political base among Democratic and independent voters in the United States.

And it far transcends the disappointment of those abroad who saw in him the embodiment of the special promise that the United States has held for long around the globe, as a universally relevant beacon of hope.

What the entire world sees instead is the principal flaw in the mechanism that brought Mr. Obama to power over decades.

The mechanism of his rise was that he always dutifully dispensed with what the country’s elites — whether at university, in business, politics or wherever else — wanted done.

The genius — and principal fraud — of the Obama act was that he presented all of this skillfully, but disingenuously in his soaring, liberalizing rhetoric.

Always appealing to Americans’ higher aspirations, he then regularly lets them down in the boiler room of politics.

That makes Mr. Obama into a Jimmy Carter — but without the principles. President Carter had the right ideas, but was brutally stomped out by an elitist body politic that felt threatened by his election to office.

Mr. Obama is different. He neither has Carter’s principles nor his plain-folk thinking, although Obama does an excellent job, far better than Carter ever could, articulating them.

The Obama principle is to talk folksy, while always busying himself with doing the handiwork of the elites, whether in business, national defense, intelligence or otherwise. In short, it’s a fraud committed on the American people at large.

The reason why the most recent episode is doubly stinging is that it took place on his home turf, civil rights. Just as African Americans have long been concerned about his primarily paying lip service to their interests, that’s how liberal America feels now.

When faced with a choice, Mr. Obama quite reliably ends up doing voluntarily what conservative and very statist Republicans would do.

Sure, the Republican House broadly acts in an obstinate manner.

But that doesn’t mean he would have to fall over backwards, meeting them firmly on their turf when the real negotiating begins. Only a man feigning to be a politician would do that.

Which leaves us to expect the next move of the President’s doing conservative Republicans’ bidding.

With the dual appointment of the duo of Susan Rice and Samantha Powell, speculations are rife that the odds are shifting toward more U.S. engagement in Syria.

That would be another case of doing archconservative Republicans’ bidding, in this case principally that of the unlikely duo of Senators McCain and Graham.

All of which leaves more than a triple sour taste in one’s mouth about:

The latter point is the worst of all.