The Changing Nature of Power in Asia

Highly distinctive characteristics of East Asian societies have shaped the region’s politics. Are family traditions changing because of modernization? 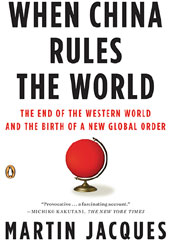 Author and China scholar Martin Jacques is the author of When China Rules the World: the End of the Western World and the Birth of a New Global Order (Penguin, 2nd edition, 2012). It was first published in 2009 and has since been translated into fourteen languages. The book has been shortlisted for two major […]

There is a profound difference between the nature of power in Western societies and East Asian societies. In the former, it is driven by the quest for individual autonomy and identity.

In contrast, at the center of East Asian culture — both North-East Asian (in other words Confucian-based culture) and South-East Asian — is the individual’s desire for a group, and especially family, identity.

This distinction also extends to the government sphere. In the Western world, governance rests, in theory at least, on the notion of utility. Government is expected to deliver certain benefits to the electorate, in return for their support.

In East Asia, things are structured differently. Historically. the function of government in East Asia has been more opaque. The most important contrast to the West is the separation between the concepts of power and responsibility.

Rather than being based on utility, power was seen as an end value in itself, as intimately bound up with the collective well-being of society. Government thus had an essentially paternalistic role and the people saw themselves in a relationship of dependency.

Obviously, under the pressures of modernization and economic growth, East Asia’s societies have been obliged to become more utilitarian — as the idea of the developmental state suggests.

And yet, the traditional ways of thinking about government remain very strong.

This is reflected in the persistence of paternalistic one-party government in many states in the region, even where — as in Japan, Malaysia and Singapore — elections are held regularly.

Although these generalizations apply to both South-East and North-East Asia, there are marked differences between the two.

Let us take a closer look at the Confucian-based societies of China, Japan, Korea, Taiwan and Vietnam.

The Chinese were extremely unusual in that, from very early on, they came to see government in primarily secular terms.

Rather than presenting itself as the expression of divine authority, Confucian rule was based on the idea of an ethical order. Rulers were required to govern in accordance with the teachings of Confucius. They were expected to set the highest moral standards.

There was an elaborate political hierarchy that presumed and required an ascending ladder of virtue on the part of office-holders.

The political structure was seen as synonymous with the social order. The overall objective was a harmonious and balanced community.

These principles informed Chinese governance in varying degrees from the Qin through to the fall of the Qing.

The model of both society and government was based on the family, an institution intimately familiar to everyone. The individual was seen as part of society and the state in the same way as he or she belonged to his or her own family.

The Confucian family was possessed of two key characteristics. The first was filial piety, the duty of the offspring to respect the authority of the father who, in return, was required to take care of the family.

As the state was modeled on the family, the father was also the role model for the state, which, in dynastic times, meant the emperor.

Second, although the Chinese were not by and large religious, they shared with other Confucian societies a transcendental belief in ancestral spirits: that one’s ancestors were permanently present.

Deference towards one’s ancestors was enacted through the ritual of ancestral worship. This served to emphasize the continuity and lineage of the family and the relatively humble nature of its present living members.

The belief in ancestral spirits also encouraged a similar respect for, and veneration of, the state as an immortal institution which represented the continuity of Chinese civilization.

The importance of the family in Chinese culture can be gleaned from the special significance — far greater than in Western culture — that attaches to the family name, which always comes before the given name.

As a result, socialization via the family was and remains a highly disciplining process in Confucian societies. Children learn to appreciate that everything has its place, including them.

People learn about their role and duties as citizens as an extension of their familial responsibilities. It is through the family that people learn to defer to a collective — and that the individual is always secondary to the group.

That is very different from Western societies which historically have tended to rely on guilt through Christian teaching as a means of constraining and directing individual behavior,

It is not externally induced through religious teaching, as in the West, though that tradition has weakened in an increasingly secular Europe.

Such is the power of this sense of belonging — to one’s own family, but then by extension to society and the state — that it has resulted in a strong sense of attachment to, and affinity with, one’s race and nation — and, by the same token, a rejection of foreigners as ‘barbarians’, or ‘devils’, or the Other.

This also explains why all the Confucian countries share a biological conception of citizenship.

The strong sense of patriotism that characterizes all of these societies — China, Japan, Korea, Taiwan and Vietnam — has generally been ascribed to a reaction to overbearing Western pressure, including colonialism.

But this is only part of the picture, and the rather less important part.

This also explains why Confucian societies have a rather different conception of government than we are familiar with in the West. We see the state essentially as an artificial construct, an external institution that people seek to hold to account.

Because of that conception, Westerners view government with a certain suspicion, whose powers they constantly seek to define, limit and constrain.

For the Chinese — and the same can broadly be said of the other Confucian societies — the state is seen as a natural and intrinsic part of society.

It is an integral part of the wider common purpose and well-being.

The state, like the family, is subject to neither codification nor constraint. The Chinese state has never been regarded in a narrowly political way.

It is always viewed by the people as more broadly based, providing a source of meaning, moral behavior and order.

That it should be accorded such a universal role is a consequence of the fact that it is so deeply rooted in the culture that it is seen as part of the natural order of things.

Given that East Asian polities operate by very different customs and practices to those of the West, can we draw any conclusions as to their merits and demerits?

This is a tricky question, because Westerners, however broad-minded they may be, inevitably tend to apply Western criteria.

Westerners are inclined to see dependency as a negative, while East Asians veer towards the opposite view and see it as a positive.

Who is right? It is impossible to make a judgment. In some ways, for example, East Asian political leaders are also more accessible and more approachable.

Why? Because they view their accountability to society in a more holistic way and people take a similar attitude towards them.

That leaves us with one final, truly big question: The highly distinctive characteristics of East Asian polities may be rooted in history, but are they declining with modernization?

The evidence is mixed. In some ways, they are getting stronger. As the ideology of anti-colonialism has weakened, there has been a reversion to more traditional familial and indigenous attitudes.

And although the family itself is changing — in China, it is far less patriarchal than previously — it remains very different from the Western family, especially in terms of responsibilities, values and attitudes.

Family customs have been among the slowest of all Asian institutions to change.

My own conclusion is that such is the profundity of the forces that have served to shape East Asian societies it is impossible to envisage these societies somehow losing their political distinctiveness.

Editor’s note: This article is adapted from When China Rules the World (Penguin Press) by Martin Jacques. Published by arrangement with the author. Copyright © 2012 Martin Jacques.

The Chinese, from very early on, came to see government not as an expression of divine authority, but in secular terms.

Under Confucian rule, the political power structure is seen as synonymous with the social order.

Children in China learn to appreciate that everything has its place, including them.

Through family, the Chinese learn to defer to a collective and that individuals are always secondary to a group.

Author and China scholar Martin Jacques is the author of When China Rules the World: the End of the Western World and the Birth of a New Global Order (Penguin, 2nd edition, 2012). It was first published in 2009 and has since been translated into fourteen languages. The book has been shortlisted for two major […]

The Chinese, from very early on, came to see government not as an expression of divine authority, but in secular terms.

Under Confucian rule, the political power structure is seen as synonymous with the social order.

Children in China learn to appreciate that everything has its place, including them.

Through family, the Chinese learn to defer to a collective and that individuals are always secondary to a group.

Learning from Our “Youngers”