Only a united front against corruption can bring about its end. 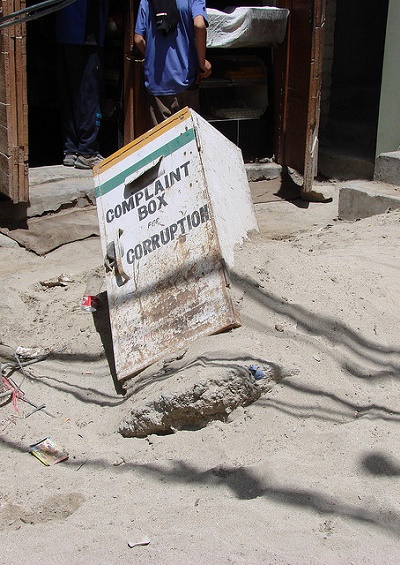 Multiple major corruption crises are splashing across the front pages of newspapers across the globe. Taken together, these crises are contributing to global insecurity and to financial and economic instability, while they are challenging freedom and democracy in many countries.

The individual cases of grand corruption involving political leaders are reported case by case. The dangerous mega-impact, however, is only really evident by looking at the crises in combination.

On security, the extraordinary levels of corruption that pervade every aspect of government and business life in Afghanistan, Pakistan, Iraq and Nigeria today, have critically undermined the influence of the governments in these countries and their ability to secure peace and fight terrorism. These crises are damaging global security.

The core relationships between corruption and insecurity are increasingly being reported and analyzed by government officials, such as the U.S. Inspector General for Afghanistan; by non-governmental organizations, such as Global Witness and Transparency International, and by scholars, notably a new book by Sarah Chayes of the Carnegie Endowment entitled “Thieves of State.”

Then, while corruption is not the major cause, it is contributing substantially to the slow-down in growth in a number of economies, for example, Brazil, Russia, Turkey, Ukraine, Greece and South Africa. The bottom line is that the problems in these countries are combining to weaken global growth.

Let me explain with a few examples. The security and economic challenges in and around Ukraine are complicated by the continuing massive corruption across the country. The country is bankrupt, largely due to theft by the previous regime.

Now, the Ukraine government is striving to negotiate major loans from the International Monetary Fund and Western countries, but the creditors are worried that their cash will just be stolen. No wonder, when Ukraine today, for example, is described in a recent article in The Guardian as, “Welcome to Ukraine, the most corrupt nation in Europe.”

The continuing Greek economic and financial crisis, posing threats to Eurozone cohesion, is due to a considerable extent to the combination of years of tax evasion and avoidance by Greeks, plus major corruption conspiracies involving the political establishment and business elites. The radical left-wing Syriza party won the last election largely by highlighting anti-corruption pledges.

Brazil faces a recession, yet the focus and effectiveness of the government is diverted by the largest corruption scandal in the country’s history. The largest Brazilian corporation, Petrobras, has been found to have given tens of billions of dollars of contracts in return for bribes that went to company executives and leading politicians.

On March 15, hundreds of thousands of Brazilians took to the streets to call for the impeachment of President Dilma Rousseff over the Petrobras corruption scandal.

And in China, officials in government, business and the military are widely seen as being scared to take decisions in case these may be seen as corrupt. Hundreds of thousands of people have been investigated over the last 18 months for corruption, as President Xi Jinping wages an unprecedented campaign.

The impact may be affecting efficiency and contributing to a significant slowdown in growth. The leadership of the nation has warned that in the campaign “no official is untouchable.”

Russia is the perfect illustration of how rampant corruption is damaging the economy, adding to international insecurity and smashing hopes for building democracy. The scale of Kremlin corruption is vast, according to an exceptionally detailed study by Professor Karen Dawisha at the University of Miami in Ohio.

In “Putin’s Kleptocracy – Who Owns Russia?,” Dawisha explains how over many years a well-planned network, with Putin at the helm, has plundered the national treasury and major Russian enterprises.

Now, for many reasons, including corruption, Russia is facing recession. As the pressure mounts on Putin, so his administration has been ruthless in repressing opponents and pro-democracy and anti-corruption activists. The media have been increasingly censored and opposition politicians have been forced to flee the country or murdered, as was the fate of Boris Nemtsov.

It may not be the case that corruption across the world is worse today than ever, or that its consequences are more damaging. Rather, never before has there been so much mainstream media and social media focus on corruption.

The Internet has facilitated the spread of increasing information and made maintaining government secrecy all the harder. An increasing number of investigative reporters have taken full advantage, encouraged by mounting general public awareness of the potential of mass protests.

The plethora of news about corruption scandals is strengthening public support for anti-corruption, pro-democracy non-governmental organizations in many countries. Slowly this has influenced perspectives among world leaders.

The US, UK and other governments are starting to recognize that it is going to take multilateral action to curb widespread corruption.

This was well illustrated with the encouraging decision by the Group of 20 at its last summit in November in Brisbane, Australia, to agree on a “Group of 20 Anti-Corruption Action Plan 2015-16.”

The plan covers many areas, including economic development and money laundering. The challenge now is to ensure that it is enforced.

Major corruption crises across the globe are contributing to global insecurity and economic instability.

Global corruption is challenging freedom and democracy in many countries.

Ukraine is bankrupt, largely due to theft by the corrupt previous regime.

The internet has opened up new opportunities for corruption prevention worldwide.

Never before has there been so much mainstream media and social media focus on corruption.

Major corruption crises across the globe are contributing to global insecurity and economic instability.

Global corruption is challenging freedom and democracy in many countries.

Ukraine is bankrupt, largely due to theft by the corrupt previous regime.

The internet has opened up new opportunities for corruption prevention worldwide.

Never before has there been so much mainstream media and social media focus on corruption.

Vladimir Putin: The Antithesis of a Success Story