The United States as a Haven of Economic Inefficiency

Can the U.S. economy trim costs and make itself internationally competitive? 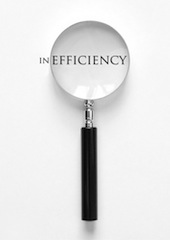 We are in an era when global competition from middle-income and low-income countries has intensified beyond all historical experience.

The top priority for U.S. policymakers and Americans in all walks of life must be to get excess costs out of the U.S. economy.

Internationally active U.S. businesses have been doing this for decades, partly through outsourcing production to cheaper-wage locations. This strategy has helped them increase U.S. corporate profits close to record levels when measured in terms of GDP.

However, only a minority of the U.S. economy consists of internationally-traded businesses. The remainder is barnacle- and weed-ridden beyond belief.

In terms of cost, it is important to remember that the U.S. economy was never especially competitive in many sectors. It survived mainly because of its vast size.

Consider the case of heavy industry. It became dominated by U.S. manufacturers only after the 1862 Morrill tariff blocked British, German and other foreign imports.

Behind the high tariff wall, U.S. firms built dominance in most industries in which economies of scale were important.

Britain tried to compete from 1846 to 1932 on the basis of free trade. But with a relatively small domestic market, its efforts were futile and British industry declined in global importance.

This lack of competitive pressure resulted in increasingly lavish labor contracts. This broad trend started with Henry Ford paying his workers $5 day in 1914 and continued with the high wages paid in the internationally uncompetitive 1920s.

This trend accelerated still more so with the New Deal and the passage of the Wagner Act in 1935.

In the prosperity of the 1950s and the 1960s, relatively unskilled blue-collar workers in the United States who were lucky enough to join the right union were rewarded in a way that will probably never be repeated again.

Since about 1970, most of this has all fallen apart. In the 1970s and 1980s, European countries were once again competitive. They too had excessive union contracts, but nothing like what was seen in the United States.

A telling sign of trouble, both with regard to cost structures and product innovation, became visible at that time. It turned out that U.S. automobile manufacturers were unable to compete with the Europeans even in the home U.S. market.

One is technological: The invention of the Internet and modern cell phone technology has made it possible to construct global supply chains using cheap-labor manufacture of goods and services.

The other is financial: From 1995 onward, the U.S. Federal Reserve pumped excessive amounts of money into the global economy, eliminating the capital cost advantage that had previously protected U.S. manufacturers from competitors in cheap-labor economies.

All of this has resulted in an unemployment rate that, adjusted for the reduced level of labor participation, is currently around 12%.

Another telling sign is that the U.S. median wage level has declined 9% since 2000 and will undoubtedly decrease further in the years to come.

Without structural change, the U.S. economy’s position will not significantly improve. However, its rate of decline may diminish. The invention of fracking has provided the United States with abundant supplies of cheap natural gas.

This gives it a comparative advantage in energy-dependent sectors that it has not possessed since 1960 or so. This should enable energy-intensive manufacturing and chemical processing to spring up.

Areas such as rural Pennsylvania in which natural gas is exceptionally cheap and moderately priced labor is readily available stand to benefit. That alone won’t revive the U.S. economy, but it should slow its decline.

There is no question that the U.S. financial sector nowadays adds more cost than value. From about 1980 onward, financial services’ share of GDP more than doubled — thanks to an explosion in rent-seeking.

Big, straightforward measures — such as a transaction tax, limiting the volume of “high speed” trading and making standard derivatives contracts available to all on public exchanges — the sector needs to be shrunk back to its 1970s size.

That would guarantee that the financial sector actually supports the U.S. economy — and not the other way around.

In addition, deposit insurance should be cut back to a maximum of $50,000. This simple step, making large depositors perform at least rudimentary analysis of the banks where they put their money.

Finally, regulation itself must be severely pruned. Consider the excessive cost of infrastructure. Why is it that a railroad from Boston to Washington is estimated to cost $150 billion and take 30 years to build?

This is very largely due to the jungle of environmental, safety and other regulations that now bedevil any large project. Europe, no stranger to regulations, gets things done at lower costs. Why is that?

U.S. infrastructure projects now cost about 10 times, in real terms, what they did in 1900-50. They are at least double the cost in even the highly regulated European Union.

Cutting out costs as outlined above will be enormously unpopular initially. It strikes at vested interests in every sector of American life. If the U.S. economy is to compete successfully in the future, it is essential to become far more cost-effective.

The United States now competes with Asian economies that are now often as well capitalized as the U.S. one.

In addition, those economies rely on a well-trained labor force and operate on the basis of a far more efficient business climates.

But more than all the current discussions about the levels of taxation and government spending, weeding out American inefficiency should form the centerpiece of the next successful Presidential administration.

In terms of cost, the U.S. economy was never especially competitive in many sectors.

U.S. firms built their dominance in most industries in which economies of scale were important.

After the World Wars, U.S. industry benefited from its competitors' devastation.

Europe had excessive union contracts too, but nothing like what was seen in the United States.

Without structural change, the U.S. economy's position will not significantly improve.

In terms of cost, the U.S. economy was never especially competitive in many sectors.

U.S. firms built their dominance in most industries in which economies of scale were important.

After the World Wars, U.S. industry benefited from its competitors' devastation.

Europe had excessive union contracts too, but nothing like what was seen in the United States.

Without structural change, the U.S. economy's position will not significantly improve.