The United States Vs. China: Investing in the Future Now

How do the Republican promoters of limited government get away with their myopia? 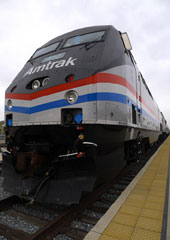 The first time I boarded an Amtrak train was 32 years ago. I had just come to Georgetown University as a Fulbright Scholar from Germany and took the train to visit New York City over the Christmas holidays.

At the time, I knew little about the state of public transportation in the United States. I was shocked about the snail-like pace, lack of comfort and roughness of the ride — not to mention the unpleasant smells that penetrated the cabins. I did not think much about it, but I thought that the United States could surely do better.

Ten years later, I commuted for three years on weekends between New York and Washington, DC. I was so repelled by this experience on a train system that had made no progress that I swore never to take a train again in the United States.

It was actually not until December 2012 that I violated this promise. My expectations were low, because I knew that the country had failed to invest in public transportation, especially trains. My now-fellow citizens seemed to cringe at the thought of spending any tax dollars on maintaining the nation’s infrastructure.

The infrastructure of the United States had once been the envy of the world. But it has continually decayed to a state where it can now hardly compete with advanced emerging countries.

Yet nothing could prepare me for the Groundhog Day feeling 32 years after my first Amtrak trip. I had read all the stories about trains breaking down with almost regular frequency. The ride still loosens the fillings in my teeth.

Even a conductor’s work seems like a throwback to the 19th century. Oh yes, conductors now carry scanners to process your e-ticket. But they still take a little paper receipt indicating your final destination and clip it — for lack of a better place — into a metal rim of the overhead compartment.

It is incomprehensible that the nation which came up with iPhones and iPads, Facebook and Twitter, the Space Shuttle and the International Space Station, predator drones and bunker-busting bombs has utterly failed to build a high-speed train system on its eastern and western coasts.

In France, the train ride between Paris and Metz (two cities separated by the same distance as Washington and New York) takes an hour and twenty-six minutes. Even the “fastest” Amtrak train, the ever-unreliable Acela, takes almost twice as long, an approximate two hours and forty-five minutes.

So, what is the reason for this grotesque failure? It is the same reason as for the neglect of our entire infrastructure, including crumbling bridges, pothole-filled highways, water mains that have not been inspected for decades and overhead electrical lines that succumb to even the smallest of storms — Republicans.

The Republicans’ small-government mantra has sapped most investments out of U.S. infrastructure and fixated on redistributing income to the rich instead.

Liberals, for many decades, were far too dispirited to point out the obvious and calamitous fiasco of the Republican “vision.” But they, too, were hesitant to take more money out of campaign donors’ pockets.

Instead of dealing with the infrastructure and taxation challenge, the U.S. political establishment draws our attention to side-shows of little meaning, such as Chinese currency manipulation, in a hapless effort to divert us from their own shortsightedness.

Republicans, especially, willfully ignore the greatest competitive advantage that the Chinese have created for themselves. That would be an infrastructure that in parts of the country has no international comparison.

With that infrastructure they have laid the foundation for an environment in which businesses thrive. And yes, thriving businesses have allowed the Chinese to collect enough revenues to pay for their enormous projects. Nothing communist about it.

Just in case you wonder what Part II of China outsmarting America will be, it is human infrastructure investments. Coming soon to a workplace near you!

Of course, there are flaws to the Chinese economic model, so it is easy for Americans who are searching for an excuse for their own inaction to dismiss. But how about Germany?

But how could the promoters of limited government get away with their myopia? The reason is the nexus between investments and returns. Building new factories or introducing new technologies initially subtract from a company’s profits or increase its borrowing.

But after completion, these investments are expected to increase output or raise productivity. Both will directly affect the future bottom line of the company — and the country.

In other words, the rate of return on a capital investment in the private sector is easily calculated and backtested.

It is vastly different for public-sector investments. Infrastructure projects, like private-sector investments, have ramp-up and operating costs, which in the public sector are covered through a higher tax take or larger deficits.

The key difference, however, is that the return on public capital cannot be linked directly to commonly agreed-upon metrics. Why? Because the ultimate beneficiary of public-sector investments is the private sector.

Improved physical and human infrastructure financed by the public sector has a direct effect on productivity, competitiveness and hence profitability of the private sector. In other words, a company invests so it will become more profitable.

Meanwhile, the government invests so that private sector companies may thrive. The lack of an easily identifiable rate of return on public-sector investments makes these investments easy prey for stigmatization by fringe elements.

Sadly, it has become impossible to have a rational discourse about these issues critical to the future of the United States, let alone finding meaningful solutions.

Hence, get prepared for a world where, 32 years from now, my son will take the train from New York to Washington, still shaken by the ride, still spending endless hours idly sitting around because of engine problems, still arriving late and — by then — probably taking 10 times as long as his friends in China who are traveling the same distance.

Of course, my son will also earn far less money than his Chinese friends and he will be part of the first generation of Americans worse off than their parents.

To be sure, none of this is the fault of the Chinese. It is ours — as we have willfully, recklessly, needlessly and voluntarily abrogated the American Century to China.

In France, the train ride between Paris and Metz — the same distance as D.C. to New York — takes one hour and twenty-six minutes.

The greatest competitive advantage that the Chinese have created for themselves is an infrastructure that has no international comparison.

Part II of China outsmarting America is human infrastructure investments. Coming soon to a workplace near you!

That we are creating the first generation of Americans worse off than their parents is not the fault of the Chinese.

In France, the train ride between Paris and Metz — the same distance as D.C. to New York — takes one hour and twenty-six minutes.

The greatest competitive advantage that the Chinese have created for themselves is an infrastructure that has no international comparison.

Part II of China outsmarting America is human infrastructure investments. Coming soon to a workplace near you!

That we are creating the first generation of Americans worse off than their parents is not the fault of the Chinese.