By Stephan Richter and Bill Humphrey 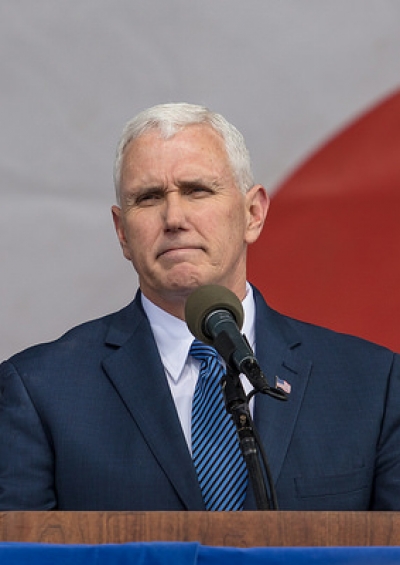 One decision in July 2016 by Donald Trump’s short-lived campaign manager, Paul Manafort, may come to haunt the American people before long – the selection of the now 58-year old Mike Pence as the Vice Presidential candidate.

At the time, with few believing Trump would ever win the election, minimal attention was paid to Pence. Trump also took up all the attention, allowing Pence to fly under the radar.

But with the steady drumbeat of Russia-related allegations against Trump and his family, and Pence already measuring the drapes in the Oval Office, it is high time to examine what a possible President Mike Pence really means.

It could be argued, superficially, that where Trump is undisciplined and highly entertaining, Pence is somewhat more disciplined and very low-profile, perhaps even boring. The actual news is far worse.

Vice President Pence is a complete nutcase, to put it bluntly. Where Trump adopts extreme positions to stay in the news, Pence’s views are actually built on conviction.

Pence is, admittedly, smoother than Trump. But his folksy Midwestern demeanor masks extreme views. As early as June 2006, when he was a U.S. Representative for Indiana, Pence introduced legislation for “self deportation” as part of immigration reform.

It was one of 90 bills and resolutions he introduced while in Congress, none of which ever passed in 12 years, most of which he served in the majority (thus giving him a powerful perch to craft legislation that passes).

As outwardly smooth a Republican all-star operator as Pence comes across, that is a devastating statistic. It underscores that he is a conservative radical, not a bridge-builder and consensus seeker.

The stereotype of a wolf in a sheep’s clothing captures Pence quite well.

After he moved from the U.S. House of Representatives to become Governor of Indiana in January 2013, Pence quickly established a polarizing and alienating record that eventually drove away many of his own Republican supporters and donors.

Pence signed into law a measure to allow religiously-based discrimination against gay people, only to have to sign a “fix” quickly after in the face of a firestorm from major corporations with investments in the state.

In addition, he signed a drastic restriction on abortion rights and sought to block refugee settlement in the state.

In October 2015, he dutifully sued President Obama’s Environmental Protection Agency, to oppose mild efforts to curb coal power emissions to combat global warming, which he has called a “myth.”

Whether that was said by conviction or as mere payback, utility companies kept his campaign coffers full and his semi-official travel paid for, with millions in donations.

Pence also presided over a large outbreak of HIV in his home state of Indiana that stemmed from the ongoing U.S. opioid crisis. Rather than moving speedily to resolve the crisis, he hemmed and hawed publicly over whether an emergency needle-exchange program would conflict with his decades of strident anti-drug policy.

Pence’s uncompassionate, hardline conservatism can be summed up with his 2005 opposition to emergency deficit spending after a thousand people perished in Hurricane Katrina: “Katrina breaks my heart. But we must not let Katrina break the bank for our children and grandchildren.”

Pence’s longstanding sound byte is that he is a “Christian, a conservative and a Republican, in that order.”

Pence might have added that he is apparently quite enamored with Saudi public morals. He has stated that he never has dinner with another woman unless his wife is present – the “Billy Graham rule” created by the televangelist of that name.

Americans have been lucky so far that Pence has not been granted the all-encompassing powers that the most recent incompetent president, George W. Bush, handed off to Dick Cheney for six years.

This has only been avoided so far because Trump refuses to let anyone else make decisions, whether or not he wants to himself.

If Pence were to become U.S. President, it could truly spell the end to many liberties. He is more dangerous than Cheney (as far as U.S. domestic politics are concerned).

On foreign policy, purely by contrast to Trump, he appears to be more predictable and therefore more acceptable to other nations. In reality, he is Cheney-esque, with a fondness for “enhanced interrogation” (= torture) and a fondness for military interventions.

If his disastrous and flailing record as Indiana Governor for four years is anything to go by, Pence is unlikely to be the reliable rock other countries might hope for in global affairs.

Nor should that self-interest perspective lead U.S. allies wishing for some stability at the helm to conclude that Pence’s elevation would be anything but an unmitigated disaster for most Americans.

Aside from his likely unpredictability abroad, where he would have the least restraint as president, domestically, a Pence Presidency would mean the true arrival of Speaker Paul Ryan’s public disinvestment agenda.

Like Mike Pence, Speaker Paul Ryan’s boring outward demeanor masks a true conservative radical. He has clashed with President Trump over the power to set the agenda. Ryan will have no such problems with Pence, who was one of Ryan’s few early allies in the U.S. House.

The Pence-Ryan agenda, outlined in the 2012 “Ryan Plan” and already hinted at by White House Budget Director (and former House member) Mick Mulvaney, calls for slashing U.S. social welfare programs to ribbons purportedly to balance the budget, even if they have little to no budgetary impact.

Hollowing out the last lines of defense

It is important to realize that Mike Pence and Paul Ryan are not targeting generous, European-style social welfare programs. They do not exist in the United States.

The Midwestern duo consider basic programs as excessive that serve as many people’s last line of defense between scraping by and sheer destitution.

Mike Pence and Paul Ryan would voucherize Medicare that keeps elderly Americans healthy. They would obliterate the food benefits that keep families from starving to death.

They would roll back the Medicaid program that gives poor and disabled Americans healthcare access and pays for elderly Americans’ nursing homes. Social Security privatization would likely follow.

Even the United States’ already severely underfunded budgets for infrastructure repair would be cut to the bone. Pence and Ryan would be a disaster for the long-term future health of the United States, its allies and its economic partners.

And that’s just on the economic side of the equation, without getting into codifying religious extremism back into U.S. law.

At best, it would be a lateral move on most issues.

Pence is a complete nutcase. His extreme views are built on conviction even more than Trump.

Mike Pence is more dangerous than Dick Cheney and not an improvement over Trump.

Pence is enamored with Saudi public morals. He never has dinner with another woman unless his wife is present.

Pence is a complete nutcase. His extreme views are built on conviction even more than Trump.

Mike Pence is more dangerous than Dick Cheney and not an improvement over Trump.

Pence is enamored with Saudi public morals. He never has dinner with another woman unless his wife is present.