In too many ways, African Americans aren’t much better off today than 50 years ago. 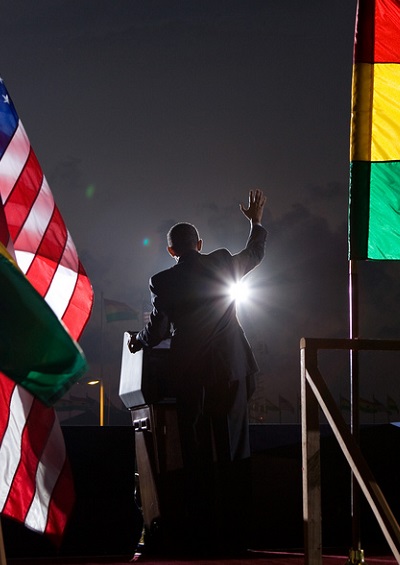 It was a historic day when Barack Obama was sworn in as the 44th President of the United States on January 20, 2009.

The fact that a black man reached that nation’s highest office was a remarkable achievement. This is all the more gratifying when viewed against the backdrop of the often brutal oppression of blacks in the United States that had come to another violent culmination only four decades earlier.

The intriguing question, though, is this: What difference for African Americans has Obama really made in office, after reaching that initial milestone?

In his close to five and a half years in the Oval Office so far, Obama has been very hesitant to delve into African American issues with any depth. Some would even say that he has run away from them, in order not to get stigmatized or appear to play favorites.

True, in February 2014, he finally launched the “My Brothers’ Keeper” campaign. It is designed “to help young minority men to succeed at critical stages in their lives from early childhood to college and career.”

Whatever the merits of that initiative, it has come too late. Washington is already full of talk of a “lame duck” president.

Meanwhile, in the nation at large, a certain self-satisfaction about electing a black man as president prevails. It is as if many people believe that checking that box unmade all the sins of the past.

On a symbolic level, having a black man as president may be important, but on a practical level, African Americans’ very real problems remain. At best, Obama’s election can only be considered an interim point in a healing process that must continue.

For example, the unemployment rate for black Americans is more than twice the rate for whites. Black teenagers are more than twice as likely not to finish high school with their peers than white teens.

And perhaps most shocking of all is the fact that black Americans are incarcerated in jails and prisons nearly six times the rate of white Americans. According to the NAACP, blacks account for about one million of the 2.3 million Americans currently imprisoned in the United States.

True, in a purely legal context, African Americans are now formally equipped with the same rights as whites. And without any doubt, the unvarnished racist hatred and unbelievable violence against them that marred America in the 1960s has been pushed out of view and toward the fringes.

But there are many subtler forms of discrimination that can hardly be squared with living in the 21st century. The constant needling by the governors, legislatures and courts of many U.S. states to suppress the black vote is a constant reminder of one fact of American life:

The level of violence and outright criminality in the white establishment may be gone, but the eagerness to discriminate in any other available form is not.

It is especially instructive to look at documentaries from the 1960s, the heyday of the struggle for civil rights. Despite all the unfathomable oppression that blacks experienced when they stood up for their rights, there was also a lot of hope, especially in young black people’s eyes. They were hoping for a better future, solid education, a solid lifestyle.

That hope has now vanished for many African Americans. The only thing that provides comfort about the 72.1% of young African American children born out of wedlock is that they are no longer alone in dealing with that challenge. The corresponding rate for white children now is 29.3%.

Republican opposition to any real social reforms that would improve these children’s lot is fierce. That is no surprise.

What is a surprise is that, even when a historic date is celebrated, providing the opportunity to do some much-needed truth telling to the nation, Mr. Obama mainly tries to make nice.

Consider the speech he gave on the steps of the Lincoln Memorial in August 2013, at the occasion of the 50th anniversary of the March on Washington. Here was finally an opportunity to tell the nation that all is not well with African Americans, far from it.

Who other than a black man who had taught constitutional law and serves as President of the United States could have spelled out on that occasion what urgently needs doing?

And yet, Mr. Obama did not do so at all. He did not even blush in limiting himself to offering mellifluous words. And he dismissed any critics “who suggest … that little has changed.”

Instead, he offered such niceties, as “There have been examples of success within black America that would have been unimaginable a half century ago.”

The closest he got to laying out the real issues was his remark that Americans must ensure that “the criminal justice system is not simply a pipeline from underfunded schools to overcrowded jails.” However, he did not delve into that key social and economic reality any further.

Contrast Mr. Obama’s relative nonchalance with the fierceness of Lyndon B. Johnson, the 36th President of the United States and the man who managed to get both the Civil Rights Act and the Voting Rights Act passed by Congress in 1964 and 1965, respectively.

Johnson was from Texas, not exactly a particularly hospitable territory for blacks at the time — and definitely not a state known for widespread enlightenment. Even so, LBJ rose to the occasion, even against the advice of his own staff.

Considered a masterful operator of the political machine, he was believed to have no moral compass. The Kennedys, in contrast, John F., the late President, and Robert F., the Attorney General, were considered to own political morality because of their refined upbringing.

In reality, it was the other way around. The Kennedys were quite squishy and only dealt with the civil rights issue when there was absolutely no other choice. Johnson, faced with a series of shocking events, focused on the issue squarely.

As he said on the occasion of the signing of the Civil Rights Bill on July 2, 1964:

Those were remarkably clairvoyant words under any circumstance. And then he continued:

But it cannot continue. Our Constitution, the foundation of our Republic, forbids it. The principles of our freedom forbid it. Morality forbids it. And the law I will sign tonight forbids it.

What made his remarks before a national television audience so much more powerful was the fact that, in his physiognomy, Johnson actually resembled the roughhewn, if not somewhat nasty looks of some of the most oppressive Southern officials.

Subliminally, that sent a message of healing. The President showed great compassion and true backbone standing up for the rights of those oppressed Americans.

All the more so because he knew the heavy political price that he would pay for his courage — the loss of the South as a key power region for the Democratic Party. Today, few state houses and governorships there are in the hands of the Democrats.

The other crucial point Johnson highlighted as he signed the 1964 law was that it is not enough to proclaim equal rights and principles.

The mile versus the marathon

Americans have a bad habit of celebrating at the mile marker, instead of finishing the marathon. It was necessary to take bold action in the 1960s to make full the hollow words of the Declaration and the Constitutional amendments adopted after the U.S. Civil War.

Likewise, the election of President Obama was an important milestone, but not a crowning achievement in itself.

The United States must still meet the promise of that event and work to correct the insidious and less visible violations of civil rights — and the economic imbalances that are the legacy of past misdeeds — and that still persist across the country.

What difference for African Americans has Obama really made in office?

At best, Obama’s election is an interim point in the US’s process of racial healing.

What difference for African Americans has Obama really made in office?

At best, Obama’s election is an interim point in the US’s process of racial healing.