China Vs. the West: The Renewables Arms Race

How should the West respond to China becoming a renewables superpower? 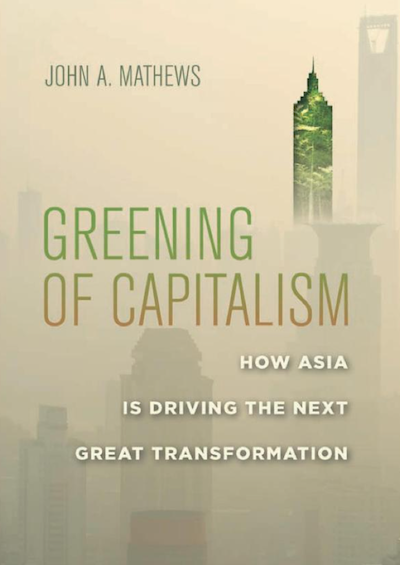 “The Greening of Capitalism: How Asia is Driving the Next Great Transformation” by John A. Mathews (December 2014, Stanford Economics and Finance)

Why is China leading in the race for renewable energy? In terms of a detective novel, China has both motive and means to build a new green growth system.

It has abundant motives due to the appalling pollution problems it has created in over three decades of unbridled economic growth. (These problems are reviewed in telling detail in the YouTube video “Under the Dome” by Chinese journalist Chai Jing).

China also has the means in the form of a strong state. The government is prepared to intervene in the economy to drive the promotion of manufacturing industries that are producing green energy and resource devices.

China’s move has direct consequences for Western countries. They have to be prepared to intervene in their own economies, to build green energy and resource systems with the same determination as shown by China.

If that does not happen, they will continue to lose the international competition over the emergence of clean tech economy. In solar photovoltaic cells, for example, China now dominates global production of first-generation crystalline silicon.

While it is a common experience for an industrial latecomer, the question is what happens next? There is still no dominant technology in second-generation thin film solar cells.

Under these circumstances, smart industrial strategies pursued by the West could set off a new technological trajectory. Advanced companies could maintain a lead for years until Chinese firms catch up.

It is indeed useless to cope with China’s export strength in commodity-style manufactured green products (like solar cells) with trade sanctions. That, of course, has been the response so far from the United States and the EU.

These sanctions may comfort Western minds, but they do nothing to enhance new technologically sophisticated green industries in the West.

On the contrary, it will make China divert resources into building upstream industries (such as silicon for first-generation solar cells) as a counter to the trade sanctions.

What would make much more sense for the West and other countries is the full-strength pursuit of industrial strategies to promote new technological trajectories.

Capitalism is the vibrant techno-economic system that enables such industrial dynamics to be pursued. It is no secret why China is pursuing energy abundance and resource security through its highly targeted industrial strategies.

The only mystery is why the West allows China to win this competition. It lies in the West’s own interests to change its past ways and be ready to engage directly with the Chinese competition through industrial strategy.

The West’s underlying rationale would be to expand energy security through the manufacture of renewables. Such a change of strategy and direction would go a long way in restoring some balance with China.

With good reason, the advance of clean technology is viewed as the front line in dealing with global warming. It has been characterized by leading economists, such as Lord Stern, as the great moral challenge of our time.

But renewables play on a broader stage than decarbonization. The essential feature of renewables is that they are products of manufacturing. As such, they are limited only by the buildup of manufacturing capacity and the resources needed to feed that capacity.

The more a country places priority on resource recirculation (as China is doing through its prime developmental goal of creating the Circular Economy), the faster it gets rid of resource limitations on manufacturing.

They also offer immediate relief from particulate pollution from burning of coal, which is making the air of cities like Beijing unbreathable.

For China, renewables promise a pathway to energy generation by utilizing the products of manufacturing – wind turbines, solar cells – rather than overly relying on fossil fuels from places like Sudan, Nigeria, Iran or Venezuela.

Sourcing fossil fuels from these places only brings a lot of geopolitical complications — including civil wars, revolutions and terror. By comparison, renewables offer a conflict-free source of energy security that is limited only by the country’s manufacturing capacity and technological development.

All this goes a long way in explaining China’s emerging leadership in renewable energy industries. However, why does the West not respond in kind?

The common assumption held in our countries is that renewables are first and foremost essential to the fight against global warming. That is at best a defensive strategy.

These are both simple yet profound goals – and they imply simple, yet profound changes to capitalism. They are simple in that they can be expressed in the formula “Resource security and energy abundance.”

But following through such policies would imply a commitment to industrial strategy that is decidedly unfashionable in the twilight of the neoclassical era.

Editor’s note: Adapted from the book Greening of Capitalism: How Asia is Driving the Next Great Transformation (Stanford University Press, 2014)

China has both motive and means to build a new green growth system.

China is pursuing energy abundance and resource security through its targeted industrial strategies.

The advance of clean technology is the front line in dealing with global warming.

China has both motive and means to build a new green growth system.

China is pursuing energy abundance and resource security through its targeted industrial strategies.

The advance of clean technology is the front line in dealing with global warming.

Cameron, the Realist: A Message to America