Eurozone: The Battle Over What Solidarity Means

Are two divergent economic cultures clashing inside the Eurozone? 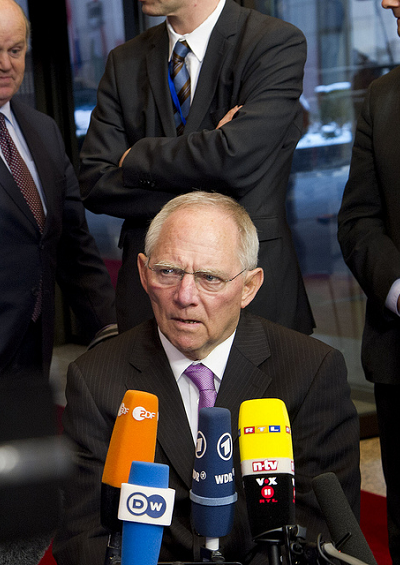 The Eurozone is not about “morality tales,” as is often stated. That term seeks to describe a German inclination to punish other nations for malfeasance. The German government is looking ahead. It is as interested as anyone to lay the groundwork now that the right structures are found for the future.

The Germans ultimately know that they will not see the Greek debt repaid. And they are doubtful about the ability of several other nations as well.

Why agree to a write-off?

For Germans, the key question about eventually agreeing to a debt write-off (or a partial collateralization of outstanding debts, say, over the 60% or 90% of GDP) is: To what end?

The very real worry is that, even if such a painful step were to be implemented, the “game” will just begin from scratch: Nations will not live up to their commitments, even on the basis of a “clean” balance sheet and an agreed upon macroeconomic framework.

That at least is the lesson from previous episodes when the concrete benefits resulting from strong moves toward European integration, such as a lowering of interest rates after the launch of the Euro, were effectively wasted in Greece and elsewhere after the turn of the millennium.

Structural issues – from overregulation to reliance on the “job-creating abilities of a bloated state sector — were simply not addressed. Instead, the monetary benefits that were intended to “lubricate” the domestic transformation were just (ab)used to preserve the status quo.

Wolfgang Schaeuble has seen all that from up close. And despite it all, he is a firm believer of offering help, provided the nations in question are making a serious effort to mend their ways.

However, the German finance minister is also an economic and political realist. While he can’t say so out loud, he know that at the core the struggle in Europe is about this: Does Europe consist of one economic culture that, while quite apart for the time being, ultimately moves toward each other?

That was the perhaps heroic and definitely optimistic assumption when the Eurozone was launched.

Or is that assumption by now unrealistic?

What the Germans – and the many nations, mostly in Europe’s north that think along similar lines – are concerned about is that there are two distinct economic cultures.

One is more consolidation-oriented, with functioning and effective public administrations. Popular will in those countries, even if begrudgingly, is prepared to make the necessary adjustments to be successful in the global economy.

The other set of countries does not have the same features and is almost constantly in crisis mode, whether they are inside the Eurozone or not.

Their elites have basically decamped financially from their country and, to add insult to injury, have much of the political system at home under control. They and other vested interests close to the state sector form an unholy alliance to stand in the way of making sensible reforms.

As a result, it is not Greece, but the outcome of reforms in France that will ultimately decide about the need to fundamentally reconsider the future shape of Europe. Greece is but an opening gambit in a much larger battle.

Assigning the required shift in economic and political thinking to a perverted love of austerity or, alternatively, to German “nationalism” is absurd.

Germany’s Social Democrats, largely following in the footsteps of their Northern European brethren, decided in 2003 to allow for far more flexibility in their labor markets than they had grown accustomed to.

That was an expression of economic realism against the backdrop of rising competition in the global economy – and by no means not an outgrowth of nationalism.

Finally, what the battle in the Eurozone boils down to is the proper understanding of “solidarity.”

Does solidarity mean to help those who got into trouble (temporarily), due to some adverse circumstances, and who are asking their partners for some help while they are focused on fixing things at home?

Or does “solidarity” mean that nations that are essentially unwilling and/or incapable of changing their underlying economic structures and political bargaining deals can preserve their political preferences – even if they don’t have the funds or capital available to do so?

That is what key people from the Greek left to the French left believe – some God-given “right” to be financially supported by others. They are in for a rude awakening. No nation is wealthy enough to engage in such a one-minded deal. It is the proverbial bottomless pit.

And that is precisely where Mr. Schaeuble draws the line. So do most other (Northern) European nations.

Editor’s Note: This article is adapted from “Germany’s France Problem.” Published on March 15, 2015 on Politico.com.

The Eurozone is not about “morality tales,” as is often stated.

For Germans, the key question about eventually agreeing to a debt write-off is: To what end?

In the Eurozone there are two distinct economic cultures at odds with one another.

What the battle in the Eurozone boils down to is the proper understanding of “solidarity.”

The Eurozone is not about “morality tales,” as is often stated.

For Germans, the key question about eventually agreeing to a debt write-off is: To what end?

In the Eurozone there are two distinct economic cultures at odds with one another.

What the battle in the Eurozone boils down to is the proper understanding of “solidarity.”