How are Japanese nationalists trying to change the constitution "without anyone noticing"? 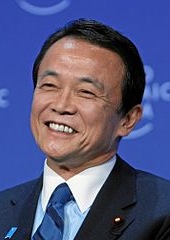 Japan’s deputy prime minister, Taro Aso — formerly the foreign minister and even the prime minister — has created a firestorm of outrage well beyond Asia. All it took was a recent speech to a nationalist group of the LDP, the governing party.

In a key part of the speech, Aso indicated that the LDP should learn a lesson from the Nazis on how to revise the constitution: Do it “without anyone noticing it.”

Aso subsequently issued a statement saying that he meant in effect the opposite of what he said.

Militants for constitutional revisionism know which of the two messages, the first or the second, is the true position of Deputy Prime Minister Aso. It is one which he shares surely with a good part of Japan’s current government and with Prime Minister Shinzo Abe.

Aso’s exhortation to learn from Nazis to change the constitution when no one is looking, is but one of a series of increasingly ominous outbursts of senior members of the current Japanese government.

In the run-up to the recent elections, there was the travesty of the Japanese Prime Minister enthusiastically strapped into the cockpit of a jet fighter with an infamous number, 731, inscribed on the fuselage. His handlers claimed it was a complete coincidence and oversight that the 731 fighter was chosen for the photo op.

However, across Asia, this immediately brought to mind the unspeakable wartime human medical experiments performed by Unit 731 of Japan’s Imperial Army.

In this embrace, there is nostalgia for a past of perceived greatness. But that was a time when Japan’s imperial military rained death and destruction throughout Asia, including the bombing of Pearl Harbor in the US and Darwin in Australia.

Moreover, there is a cold determination to enact fundamental changes to the Japanese constitution.

Aso’s allusions to stealth constitutional change is a signal to his party militants. In today’s domestic and international political context, a formal amendment of the constitution is unlikely to happen. But what can be done is quietly to bend, to stretch and to twist the interpretation of the constitution.

Eventually, the effect of such manipulation would be the same as a formal amendment.

The example of the Nazis modifying the Weimar constitution without a formal amendment was a particularly provocative comparison for many. But it was not necessarily so for those within his own party.

Although the LDP did well in the recent Upper House elections, it fell short of its ambitions, both in terms of the seats and of the popular vote it won. A two-thirds supermajority is required in the Diet to amend the constitution. The LDP and its still more extreme nationalist fringe supporters simply do not have the numbers for an amendment.

Similarly, the Lower House elections last December, which brought Mr. Abe back to power, appeared to be a landslide. However, the actual number of votes cast for the winning LDP was less than it received in the previous Lower House elections, when the party had been badly defeated.

In other words, popular support for the LDP across Japan is more shallow and narrow than is widely understood.

Domestic politics and constitutional processes aside, as Aso acknowledged in his speech, the international context is also “complicated.” Complicated, indeed, as people in China, up and down the Korean peninsula and throughout East Asia, Australia and America are watching closely.

This is not a case of acting while “no one is looking,” as Aso’s Nazi allusion suggested. Surely an attempt to amend formally the Japanese constitution would trigger vast international opposition.

But that will not keep the LDP leadership from proceeding to achieve their objectives of constitutional revision by other means.

There is talk, for example, that future Supreme Court vacancies should be filled by judges open to revisionist interpretations of the constitution. Also watch for personnel changes in areas of government which handle constitutional affairs.

What the revisionists want broadly today are the same three major changes they have sought since the early 1950s.

First, there is the matter of official rearmament. That means in effect renunciation of the stated intent of Article 9 of the constitution, a provision that commits Japan never again to develop an offensive military capability.

Second, there is a series of revisions of the individual and human rights clauses of the constitution, including the role of women in Japan’s political system.

Third is an “enhancement,” as the revisionists call it, of the status of the emperor.

Of the three, the latter is discussed the least in the broad public. In smaller circles, this objective remains central to the nationalist right, as it has been since the “Peace” constitution was adopted in 1947.

It is in this light that one can best understand the symbolism of Prime Minister Abe’s cry of “Tennou Heika Banzai!” — Long Live The Emperor — earlier this year during the first national “Restoration of Sovereignty” day ceremonies, in the presence of the emperor.

While the literal translation might seem commonplace enough in reference to a present monarch, it is actually the historical equivalent of “Heil Hitler” for 1930s Japan. It has never been uttered by a prime minister in an official capacity since the collapse of the war cabinet in 1945.

It is not clear that the Emperor was happy with the invocation of the nationalistic exhortation from wartime period of the 1930s and 1940s. But the nationalist militants were giddy with excitement at the prime minister’s full-throated cry.

Deputy Prime Minister Aso was right. There are important lessons for Japan and the rest of the world to take from the sad experience of Germany’s Weimar Republic — or indeed from Japan’s own equally sad history.

But they are just the opposite of the lessons he is urging the Japanese constitutional revisionists to learn.

Aso suggested the LDP learn from the Nazis on how to revise a constitution: Do it "without anyone noticing it."

In Japan, there is nostalgia for a lost greatness. But it is for a time when Japan rained destruction across Asia.

There is a cold determination to enact fundamental changes to the Japanese constitution to restore lost greatness.

Foreign opposition and lack of votes will not stop LDP-led constitutional revision by informal means.

People in China, Korea and throughout East Asia, Australia and America are watching Japan closely.

Aso suggested the LDP learn from the Nazis on how to revise a constitution: Do it "without anyone noticing it."

In Japan, there is nostalgia for a lost greatness. But it is for a time when Japan rained destruction across Asia.

There is a cold determination to enact fundamental changes to the Japanese constitution to restore lost greatness.

Foreign opposition and lack of votes will not stop LDP-led constitutional revision by informal means.

People in China, Korea and throughout East Asia, Australia and America are watching Japan closely.

How Competitive Is the U.S.?