Americans are loath to take action on climate change. Will they be more open-minded when the issue is cast national security terms? 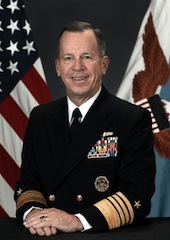 In the U.S. intelligence and military communities, there is an emerging consensus that the earth’s warming is a clear and present danger.

The U.S. National Intelligence Council’s 2012 Global Trends 2030 report identifies climate change as one of four megatrends: “The growing nexus among food, water, and energy in combination with climate change.”

The report concludes that time is of the essence.” By 2030 the emissions trajectory will be cast, determining this century’s climate outcome.”

During his tenure as Chairman of the Joint Chiefs of Staff, Admiral Mike Mullen stated, “Climate change’s potential impacts are sobering and far-reaching…

“Scarcity of water, food and space could create not only a humanitarian crisis, but create conditions that could lead to failed states, instability and, potentially, radicalization.”

The U.S. Department of Defense’s “Climate Change Adaptation Roadmap” for 2012 identifies how “climate change will shape the operating environment, roles and missions that the Department undertakes.”

The Roadmap also explains how “DoD [Dept. of Defense] will need to adjust to the impacts of climate change on its facilities, infrastructure, training and testing activities and military capabilities.”

Heretofore “climate skeptics” in the scientific community are even acknowledging that human-related activities are driving the earth’s warming.

In a New York Times op-ed piece, Richard Muller, a professor of physics at the University of California, Berkeley, begins, “Call me a converted skeptic.”

Muller concludes from the Berkeley Earth Surface Temperature project — which was partially funded by the conservative Charles G. Koch Foundation — that “the average temperature of the earth’s land has risen by two and a half degrees Fahrenheit over the past 250 years, including an increase of one and a half degrees over the most recent 50 years.

“Moreover,” he writes, “it appears likely that essentially all of this increase results from the human emission of greenhouse gases.”

Despite this broadening consensus among the intelligence, military and scientific communities, the America public remains largely ambivalent toward action on climate change.

I see this every day among homeowners in Atlanta, where my company makes homes energy efficient.

Over 20% of U.S. energy consumption and carbon dioxide emissions are from heating, cooling and powering our homes.

Sit down with a homeowner to present the results of a home energy audit and, of course, saving money and improving comfort will resonate. However, the mere mention of reducing the home’s carbon footprint will more than likely politicize the discussion.

Reactions to extreme weather events such as Hurricane Sandy can be telling. It prompted renewed discussion in New York City on building $10 billion-plus sea barriers to ward off the deluges of future storms.

As the earth warms, a feedback loop takes over with the emission of even more greenhouse gases that are not directly related to the combustion of fossil fuels.

The melting of permafrost and evaporation of ocean waters emit methane gas, which has 21 times the global warming potential of carbon dioxide.

The more the earth warms, the faster it warms.

Are we already beyond the point of no return on climate change, where costly adaptation amidst an otherwise ambivalent public is the only way forward?

Looking beyond our shorelines, how will climate change define America’s global role in the 21st century?

Since the onset of the industrial revolution, the United States has led the world in terms of economic prosperity through our culture of innovation and entrepreneurship.

Yet in combusting fossil fuels, we have also been the world’s leading contributor to the stock of greenhouse gases that are warming the earth’s climate.

Will America rise to the complex challenge of forging a multilateral order that brings the energy security of the world’s nations in sync with the environment? Or will we languish in inaction?

U.S. President Barack Obama sought to bring climate change back to the forefront of the national debate with renewed resolution in his 2013 inaugural address:

“We will respond to the threat of climate change, knowing that the failure to do so would betray our children and future generations.”

In his 2013 State of the Union Address, he added, “I urge this Congress to get together, pursue a bipartisan, market-based solution to climate change…

“But if Congress won’t act soon to protect future generations, I will.”

Rhetorical flourishes aside, with major initiatives yet to be forthcoming, the key question is: Will public sentiment be ripe for meaningful action?

In this context, Abraham Lincoln’s words are poignant: “With public sentiment, nothing can fail; without it nothing can succeed.” On climate change, Mr. Obama has yet to convince the American public at large.

History can be instructive.

Doris Kearns Goodwin describes in her book “Team of Rivals” how President Lincoln reframed the debate on slavery in order to gain passage of his Emancipation Proclamation.

At the time, Lincoln was navigating between radical Republicans who favored abolition and conservative Republicans and Democrats, many of whom were in the border states that he needed to keep within the Union.

The breakthrough came with the realization of how the Confederacy was using slaves to further their war effort, by building fortifications for the army, servicing camps in the field and laboring to sustain the Confederate economy.

While there was no public consensus on the moral imperative to end slavery, Lincoln’s genius was to frame his Emancipation Proclamation as an issue of national security with appeal across the political spectrum.

Abolishing slavery would be critical to weakening the Confederacy in order for the Union to prevail.

Today, to forge a broad consensus of public sentiment on climate change, Mr. Obama must similarly reframe the discourse.

He must go beyond the moral imperative to preserve the environment for future generations and address its real implications for U.S. national security.

If the U.S. military establishment is in fact convinced that the earth’s warming is a clear and present danger, Mr. Obama as commander-in-chief should deploy its leadership in a concerted effort to address public sentiment on climate change.

With the credibility of politicians on both sides of the climate change debate largely compromised in the public eye, who would carry more credibility on this issue than those fellow citizens who risk their lives and dedicate their careers to keeping America safe?

The epigraph of the NIC’s “Global Trends 2030” report is, fittingly, this quote from John Maynard Keynes:

“… the idea of the future being different from the present is so repugnant to our conventional modes of thought and behavior that we, most of us, offer a great resistance to acting on it in practice.”

Yet to reverse the course of climate change, there is, in the historic words of Dr. Martin Luther King, Jr., “the fierce urgency of Now.”

The question is whether Americans, in our considered self-interest, will find the resolve to make our shorelines safe, to quell those howling winds of our own making.