Why Can’t Washington Get Anything Done on Immigration?

What actions could the U.S. Congress take on immigration that would have profound economic impacts?

What actions could the U.S. Congress take on immigration that would have profound economic impacts? 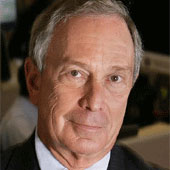 Mayor of New York City Michael R. Bloomberg is the 108th Mayor of the City of New York. He was first elected in November 2001, two months after the terrorist attacks on 9/11. Born on February 14, 1942, in Boston and raised in a middle class home in Medford, Massachusetts, Michael Bloomberg attended Johns Hopkins […]

First, we must stop providing a first-rate education in science and technology to foreign students and then force them to leave. Students come from around the world to study here. More than 40% of our engineering graduates are foreign-born. They lead ground-breaking research at the very frontiers of science, but then many are forced to leave when it becomes clear that a permanent visa will be difficult if not impossible to get.

So instead of staying here to contribute to our economy, they go home and they go to work for companies that compete with our own companies. It makes no sense. We’re investing millions of dollars to educate these students at our leading universities and then giving the economic dividends back to our competitors for free.

The two parties should be able to agree on a policy that allows any university graduate with an advanced degree in an essential field to obtain a green card and a chance to help grow our economy. We must allow those students to stay here and be part of our future, or we will watch our future disappear with them.

Second, we must stop telling foreign entrepreneurs to build their companies in other countries. America is the best place in the world to start a business. But rather than capitalize on our assets by encouraging innovators to come here and stay, we are rejecting immigrant entrepreneurs, even when they’re backed by American investors. Just remember, immigrants helped found Google and Yahoo! and eBay and Intel and so many other companies.

In fact, immigrants helped found one-quarter of all high-tech companies over the last ten years. And across all industries, they are twice as likely as native-born Americans to start companies. We need more of these dynamic entrepreneurs. And if we do not open our doors to them, they will go elsewhere, and the good-paying jobs that they create will go with them.

A foreign entrepreneur backed by American investors should be given a temporary visa to start a company in America. And if, after two or three years, the business has successfully yielded new American jobs, the entrepreneur should be allowed to continue to run his or her business and receive permanent legal status.

Third, we must stop telling American companies that they cannot hire the high-skilled workers they need. By making it difficult for them to obtain temporary and permanent visas for high-skilled workers, the federal government is slowing growth — and worse, promoting the outsourcing of American jobs.

Make no mistake about it: If companies can’t hire the workers they need here, they will move those operations out of the country. You just have to look at Microsoft’s recent decision to open a research park in Vancouver. There are lots of West Coast companies that now have offices in Canada because they can’t get the engineers into this country.

In many of these high-tech companies, talk to the owners. Talk to the managers. Talk to the stockholders. They are outside of the United States, but they’d prefer to be here. It’s just that we won’t let them bring in the talent they need.

And we not only lose those jobs, we lose their spending, and we lose their taxes. Again, this just makes no sense. We are stabbing ourselves in the back even as our economy is in critical condition.

The ability to attract and keep high-skilled labor is essential for American companies competing on the world market.

And that’s true not only for high-tech companies but also for banks and insurance companies and pharmaceutical companies, and even manufacturing firms with large research and development operations like Boeing and Caterpillar.

But right now, the cap on H1-B visas and green cards is much too low. And caps on green cards are set by countries, so Iceland actually gets the same number of visas as India. That may be fair to those two countries, but it’s certainly not fair to American business and to Americans. We should end these arbitrary limits and end the cap on the high-skilled H1-B visas. Let the marketplace decide. It’s basic free-market economics, and both parties ought to be able to get behind it.

Fourth, we must ensure that major industries, such as agriculture and tourism, that rely on those workers just starting up the economic ladder, have access to foreign workers when they cannot fill the jobs with American workers. These employers want a legal workforce, but our current system makes that extremely difficult.

Firms have to go through multiple levels of approvals to do basic hiring, and in Georgia, where they crack down on illegal farm workers, farm owners are experiencing severe labor shortages that are driving up their costs and leaving crops unharvested. At a time when food prices are rising, this is the last thing American consumers and farmers need.

Fifth and finally, we must begin allocating more green cards based on economic needs. Right now, only about 15% of all green cards go to employees and their dependents, while the rest go largely to immigrants, families and relatives.

We’re not doing what Canada is doing. Why not? America has to honor our tradition of always being open to the tired and tempest-tossed. We are a land of opportunity because we’ve always been a country of compassion.

But as we continue to be a place of refuge and reunion, we must open our doors more widely to the talented and hardworking people who can make critical contributions to our economic growth and prosperity. And that means raising green card limits based on our economic needs, so that we can allow the people who will most help our country to come here, work, invest and start businesses.

Now, of the five areas that I’ve outlined, not only are they steps that can be taken right now to help create jobs and drive prosperity across the country. Better yet, not one of the things that I’ve outlined would cost a penny. It’s all contribution, no expense.

There’s no greater force for economic revitalization of depressed neighborhoods than the influx of immigrants. And that’s not just true in New York. Immigrants have been critical to economic rebounding in small towns and big cities across America.

Take Perry, Iowa, for example. A decade ago, it was facing economic stagnation caused by years of population decline. But today, thanks to an influx of immigrant labor and immigrant entrepreneurs who have opened businesses, the town’s main street is now bustling.

The same is true of Lewiston, Maine, a decaying old mill town that has come back to life thanks to an influx of immigrants from Africa. In Atlanta, a big city, which has worked hard to become a magnet for well-educated immigrants, the purchasing power of Latinos and Asians has skyrocketed.

And across the country, cities with the largest increases in immigrant workers have experienced the fastest economic growth. There is just no question about the numbers. And in New York, immigrants are a big reason why we have weathered the national recession better than the country as a whole.

Immigration reform could be an economic engine for our entire country, creating good-paying jobs that will speed up our recovery.

Both major political parties and both ends of Pennsylvania Avenue say that restoring economic growth is their top priority — and it must be.

Editor’s Note: This feature is adapted from the speech Michael Bloomberg gave at the Council on Foreign Relations on June 15, 2011.

Not one of the things that I've outlined would cost a penny. It's all contribution, no expense.

There's no greater force for economic revitalization of depressed neighborhoods than the influx of immigrants.

We're investing millions of dollars to educate foreign students at our leading universities and then giving the economic dividends back to our competitors for free.

Mayor of New York City Michael R. Bloomberg is the 108th Mayor of the City of New York. He was first elected in November 2001, two months after the terrorist attacks on 9/11. Born on February 14, 1942, in Boston and raised in a middle class home in Medford, Massachusetts, Michael Bloomberg attended Johns Hopkins […]

Not one of the things that I've outlined would cost a penny. It's all contribution, no expense.

There's no greater force for economic revitalization of depressed neighborhoods than the influx of immigrants.

We're investing millions of dollars to educate foreign students at our leading universities and then giving the economic dividends back to our competitors for free.