Why is the United States forever engaging in political scandals and horse races — rather than in the business of governing? 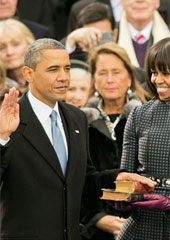 All of a sudden, it’s fashionable to point to Barack Obama’s lame-duck status. The race is on to be the first to declare him history, gone. Poof goes the (not so magic) dragon. Former Reagan speechwriter Peggy Noonan just tried to do so in the Wall Street Journal.

Political Washington is currently whipping itself into a frenzy over the latest mishaps to which acrimonious attention is given.

This time happens to be about government scandals involving the IRS and the Associated Press, as well as a tempest in a teapot over Benghazi.

Whatever the scandal of the hour, the result is always that Washington is liberated from dealing with any of the genuinely pressing issues of the nation for another day.

But before we all get carried away labeling the latest scandal the premature end of the Obama presidency, we should ask ourselves what this really means.

In a political culture that is ever more demeaning as it is sclerotic and ritual-based, we should look in the mirror and hesitate.

There is a constant temptation in the U.S. body politic and its media “body” to declare the current king or prince, depending on one’s feudal preferences, a goner.

But it is high time to realize that this is an entirely childish — and, in fact, pre-democratic — endeavor.

After all, we should all be mature, sober and experienced enough by now to stay away from investing our collective hopes in the presumed god-like abilities of a new prince (or princess) to make things so much better for the rest of us.

“The President” may (still) be the vessel in which the United States invests its hopes for the future. Post-feudalist nations are no longer so naive.

It is high time for Americans to realize that any president can only be good and effective to the degree that the nation he or she leads is essentially at peace with itself.

Where a nation is at war with itself, all such hopes are entirely misguided.

To be sure, there are reasons galore, both on the political right and what goes for the political left in the United States, to be frustrated with the current occupant of the Oval Office.

And, of course, his health care reform is running into trouble: It was conceptualized more than imperfectly and, ever since it became the law of the United States, industry and politicians alike have continued to demagogue the issue.

They made a deliberate choice to be obstinate — and not pragmatic. Rather than engaging in what used to be the business of America, rolling up the shirtsleeves and getting things done, they focused on being spoilers.

But before we all get carried away with everybody’s laundry list of favorite gripes, it is important to acknowledge two key realities of American life.

The first is that, in today’s world, it is pretty much impossible for anybody to act successfully as President of the United States.

The Founding Fathers set up their by now (in)famous system of checks and balances with the key intention to keep any one (of them) serving as President later to be too powerful.

James Madison wrote in the Federalist Papers, “If men were angels, no government would be necessary” (Federalist 51).

The tragedy of the contemporary United States is that the only way in which the hyper-complex and mega-cumbersome structure of checks and balances could conceivably work is if men were indeed angels, which of course they are not.

And so it is by design that the U.S. political system, ironic for a nation of self-stylized “deciders,” is set up in such a manner that nobody really gets to decide anything.

Upon closer inspection, even the holding of elections has become superfluous. They don’t change any realities on the ground.

End the Term Limit for Presidents

What then is the second key reality of American political life that we must reconsider?

If the argument made at the outset, that we live in an immature political system or, worse, are collectively inclined to act in a very immature manner in matters of politics, then what lies ahead — the multi-layered selection of a new “king” — is a futile endeavor.

More likely than not, whether Hillary Clinton succeeds Obama, or whether it is Jeb Bush or anyone of a myriad of potential candidates from a non-dynastic background (meaning not a Clinton or Bush), it doesn’t really matter: Theirs is a mission impossible.

If we had any sense, then we would do away with the 22nd Amendment, which limits Presidents to two terms in office.

Barack Obama could indeed be the prime exhibit for the stupidity of that rule that truly disempowers the people from electing the leader they want.

A reasonable case can be made that Obama was too young and inexperienced when, on the strength of his autobiography, he was catapulted into the White House.

He was “the one” who finally made real many of those dream-like movies (such as “The American President” and “Head of State“), where somebody rose like a Phoenix from among the people.

The odds are that by the time he has been afforded two terms of on-the-job training, he could actually make a pretty good President.

Somebody who has grown realistic and no longer believes in the mythical power of giving speeches.

Somebody who has learned to change electoral majorities and engage in other brass-tack acts of “dirty” (read: real) politics.

By 2016 (or slightly thereafter), Obama may even have managed to win majorities in the House of Representatives. Whatever may come, my contention is simply this: There is no reason on earth why Obama, or any President, should be term-limited.

As present events indicate, it’s only 2013 and everybody is getting giddy about the 2016 race. It is high time to realize that even a two-term President of the United States may de facto only have a single five-year mandate.

That incapacitation of politics is entirely of our own making.

A final, truly funny observation: Of course, any prospect of ever changing the 22nd Amendment (never mind for the incumbent) is considered a complete impossibility.

The same holds true for any other true structural reforms to how the United States has conceptualized itself.

It is high time for an American Revolution, especially since we never truly had one.

(Remember: All that was achieved during the so-called American Revolution was that we removed a foreign king from the pole position of the power hierarchy.)

Just don’t bet on the United States, the world’s premier democracy (if you believe the self-advertisement), ever to be so radically democratic in its political practices. There are some things on which even the French still have a big upper hand over the United States.

The tragedy of the U.S. today is that the system of checks and balances could only work if men were indeed angels.

By the time Obama has been afforded two terms of on-the-job training, he could actually make a pretty good President.

If we had any sense, we would end the 22nd Amendment that limits Presidents to two terms in office.

Even a two-term U.S. President may de facto only have a single five-year mandate of effective governing.

There are some things on which even the French still have a big upper hand over the United States.

The tragedy of the U.S. today is that the system of checks and balances could only work if men were indeed angels.

By the time Obama has been afforded two terms of on-the-job training, he could actually make a pretty good President.

If we had any sense, we would end the 22nd Amendment that limits Presidents to two terms in office.

Even a two-term U.S. President may de facto only have a single five-year mandate of effective governing.

There are some things on which even the French still have a big upper hand over the United States.

Learning to Love Inflation (Thanks To Quantitative Easing)