The New Globalists: Coming of Age in a New China

How is life different for young Chinese, compared with their parents’ upbringing? 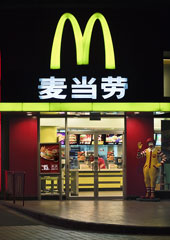 Part three of a seven part series. Return to part one or part two.

Bo was born in 1982, just a few years after China took a decisive turn toward the West. Times were still difficult for China at the time Bo was born. China was poor, backward and relatively isolated.

Economic activity revolved around agriculture and some simple manufacturing, with exports a nominal component of overall growth. Heavy industry — think steel — was the mainstay of the economy.

Like millions of Chinese, Bo’s parents were upset when China’s one-child policy was announced but dared not make waves, not with the harsh memories of China’s Cultural Revolution still in mind.

The Cultural Revolution raged on from 1966 to 1976, formidable years for Bo’s parents. They remember the social unrest, the political instability and the factional struggles of the time, and, not surprisingly, they don’t like to talk about this period of Chinese history due to their own personal and family struggles.

During the years of tumult, many of the family’s assets were confiscated. Schools were closed. Neighbors turned against each other. Family members were forcibly displaced. Some were never heard from again.

In stark contrast, Bo’s upbringing has been vastly different from his parents’ and relatives’ experiences. Bo has grown up in a country that has produced roughly 10% real growth per year since he was born.

Due in part to this outstanding economic performance, Bo has grown up in relative political stability and enjoys more personal freedoms and opportunities than his parents ever imagined.

Bo is the first in the family to have earned a university degree. He is also the first in his family to own a cell phone, a computer and a car. Regarding the last item, it was Bo and millions like him across China who helped pump up vehicle sales in China to 19.1 million units last year, a 6.2% rise from the year before.

Many first-time automobile buyers in China are like Bo — each is buying an automobile for the first time in his or her family’s history, a dynamic that has helped turn China into the largest vehicle market in the world.

In 2012, for instance, light vehicle sales in China were nearly one-third greater than sales in the U.S. For General Motors, China accounted for 30% of all vehicles sold last year.

Another family first is traveling abroad. Bo is the first in his family to have ever left China. He has been to Japan and Australia, and has traveled to the United States three times in the past five years.

While Bo’s foreign forays are unique to his family, traveling abroad is becoming more commonplace among the Chinese in general. In the first half of 2012, for instance, about 38 million Chinese ventured overseas, a rise of 18% from the same period a year ago. In 2011, the last year of full-year data, Chinese traveling overseas spent $73 billion, third only to Germans and Americans.

Finally, there is one more defining feature of Bo worth mentioning: Relative to his skinny parents, Bo, while not overweight, certainly is heftier than many elderly Chinese. “Pudgy” might be the best way to describe Bo, and he admits he could stand a little more exercise.

His mother blames his expanding waistline on his sedentary lifestyle, which includes driving a car, spending hours watching TV and playing electronic games and eating too much Western fast food.

Regarding fast food, Bo loves KFC, as do millions of Chinese, with parent-company Yum Brands’ China revenue representing more than half of the company’s total revenue. All the factors just mentioned are considered Western vices, but these traits are becoming very common to Bo and his cohorts in China.

So too is drinking good wine. Like many his age, Bo has developed a taste for good wine and is wont to visit a wine bar on the weekend with his friends. Such excursions helped boost wine sales by 20% in China last year, with sales of wine rising to a record $41 billion.

Bo’s parents drink wine only on special occasions, which helps explain why China ranks only 20th in the world in terms of per capita wine consumption. In 2011, for instance, Chinese drinkers downed only 1.4 liters of wine per person versus the French average of 53.2 liters per person. (Wine data are from Euromonitor International.)

To fend off any prospects of obesity and the effects of drinking, Bo has taken to jogging and is looking to join a health club. To get started, Bo first had to purchase a decent pair of running shoes. Like millions of other Chinese, he opted to buy a pair of running shoes from one of the most popular brands in China: Nike.

It is because of people like Bo that Nike’s second-largest market in the world — after the U.S. — is now China.

Not that Bo is a health nut. Rather, as luck would have it, Bo now has a girlfriend and the last time we checked in with him, he was meandering the malls of Wuhan for luxury brand items like Louis Vuitton, Hermes and Gucci to impress his new mate.

Bo’s girlfriend, as it turns out, loves global luxury brands, as do many Chinese. Luxury sales in China rose by nearly 20% last year. Since 2007, luxury sales have more than tripled in China, making the mainland among the largest and fastest-growing luxury brand markets in the world. (Luxury data are from Bain Consulting).

When you ask Bo if he is happy, he just grins from ear to ear. Yes, life is very good, he explains, and he expects his standard of living to only improve in the years ahead.

He is smart enough to realize that his life today is far different from and far better than his parents.’ He is the epitome of optimism. For Bo, and millions like him, there’s no going back.

For Chinese born after the 1970s, they have seen roughly 10% real growth every year since they were born.

First-time car buyers in China have helped turn the country into the world's largest vehicle market.

Travel outside China is on the rise. In the first half of 2012, 38 million Chinese ventured overseas.

Chinese revenue now represents more than half of at least one US fast food firm's total yearly revenue.

For Chinese born after the 1970s, they have seen roughly 10% real growth every year since they were born.

First-time car buyers in China have helped turn the country into the world's largest vehicle market.

Travel outside China is on the rise. In the first half of 2012, 38 million Chinese ventured overseas.

Chinese revenue now represents more than half of at least one US fast food firm's total yearly revenue.

The New Globalists: The Road Ahead