The New Globalists: The Road Ahead

As global economic activity shifts from the West, how will it change the world? 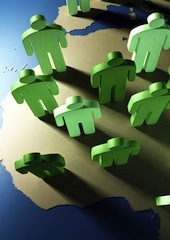 Part two of a seven part series. Return to part one here.

Only by prying — just a little — into the lives of Bo, Leyla, Sarah, Philippe and Seema does one get a sense of the tectonic shift under way in the global economy. On the surface, the Transformers appear as ordinary people living ordinary lives.

After all, what’s so special about owning a car, going to college, shopping in a mall, eating fast food, taking a vacation, buying cosmetics, owning a cell phone and buying a good pair of sneakers? To the average American, it all looks and feels pretty mundane.

But it’s nothing of the sort — at least not for the billions of newly emerging consumers in the developing nations. The Transformers are trailblazers in their own nations and represent — on a massive scale — agents of global transformation.

Their effect on the global economy is already starkly apparent in the seismic shift in global economic gravity over the past few decades.

Due to a myriad of factors — greater trade and investment flows, urbanization, expanding labor forces, rising wages, infrastructure spending, rising life expectancies, political stability, prudent macroeconomic management and, of course, the emerging middle classes of many developing nations — the world has been turned upside down.

As recently as 1980, when this analyst started his career on Wall Street, the world economy beat to the tune of the United States in particular and the developed economies in general. The West towered over the Rest.

But the tables have turned: Where the developing nations accounted for roughly one-third of world GDP in 1980, this cohort now accounts for over 55% of the global total, with China, the world’s second- largest economy, leading the way, according to the International Monetary Fund (IMF).

By pumping millions of new workers into the global labor force over the past three decades, China and other developing nations have dealt both a supply-side shock (more workers) and demand-side shock (more consumers) to the world economy.

Much of the economic narrative over the past few years has been focused on the former, notably in many developed nations, the United States included, where the common refrain is that the rising supply of workers in the developing nations has undermined the jobs and incomes of workers in the West.

To a degree, this is true—although many empirical studies suggest that more U.S. jobs have been lost to automation and technological advances than to low-cost labor in Mexico or China.

The more salient point is that the millions of workers in the emerging markets are also consumers, with more disposable income than their parents or grandparents ever had.

While the spending power of the West has been diminished by the U.S.-led financial crisis and ensuing austerity, the purchasing power among developing consumers is on a secular upswing.

Where in the past factory workers in Asia would trudge off to work on Saturday morning, today they are more likely to head for the local shopping malls for a day of socializing and shopping.

Shanghai, Dubai, Mumbai, Ho Chi Minh City, Istanbul and São Paulo — any first-time visitor to these emerging cities is struck by the vigor and vitality of the local consumer, out in force and shopping in an air-conditioned mall that might be mistaken for a mall in suburban America.

The size and scale of these urban buyers and their pent-up demand for electronic goods, appliances, automobiles, skin-care products, clothing and other goods are increasingly setting global trends. Emerging market consumers are leading in global fashion and driving global sales in a number of industries.

Indeed, in a seminal shift, global consumption is tilting toward the developing nations and away from the United States and the West.

And we have little doubt that in the not-too-distant future, the lines will cross, with Philippe, Seema, Sarah and their peers poised to take the global baton of consumption from consumers in the West.

And as the emerging market middle classes consume more, world trade flows are being altered. A shift in world imports is well under way, with the developing nations’ share of world imports reaching a record 46% last year, totaling a record $8.5 trillion, according to the IMF.

Again, in just a matter of years, the lines are set to cross and imports from the developing nations, led by rising purchases of goods and services from the likes of Bo and Company, are set to easily supersede those of the developed nations.

Peering further into the future, to the year 2030, the world will be fundamentally different from even today, let alone a few decades ago. Hu Angang and Martin Jacques take the long view — the evolution of economic activity from 1820 to 2030.

In 1820, global output pivoted around China and India, with the twin giants of Asia accounting for nearly half of world GDP. The “North,” meanwhile, or the developed nations, accounted for less than one-third of the global total.

However, owing to the Western-led Industrial Revolution, China’s turn inward, the spread of colonialism and other factors, the economic might of China and India waned over the next two centuries, while the might of the West, led by the United States, rose sharply.

By 2030, with consumers in both nations as key drivers of economic growth, China and India are expected to reclaim their respective pecking order in the global economic hierarchy.

Data Credit: Martin Jacques from When China Rules the World

Whether all of the above transpires according to plan remains to be seen. Of little doubt is this: Global economic activity is shifting from the West to the Rest, with Bo, Leyla, Sarah, Philippe and Seema and millions more like them, fundamentally altering and transforming the world we live in.

What have the Transformers wrought?

The aftershocks from the rise of the middle class in the developing nations are evident in various guises.

Their pent-up demand for electronic goods, appliances, automobiles, skincare products, clothing and other goods has reached the point where emerging market consumers are now dictating the global revenues and profitability of these industries and others.

In addition, as the new global consuming class adopts and acquires Western lifestyles — moves from the village to the city, works in air-conditioned offices, drives to work, consumes more protein — there will be greater demand and higher prices for energy, water, agricultural goods and other natural resources.

Put another way, the monopoly the West has long enjoyed in devouring the world’s natural resources is over.

For much of the post-Cold War era, the equation was rather simple: The developing nations produced commodities and the West consumed them. Those days are past, however.

Seema, Philippe and millions of other new consumers are pressuring the global commodity infrastructure. There is a dramatic shift in underlying demand for global energy, with the developing nations clearly now the global drivers of energy demand and prices.

The same holds true for the global consumption of meat, fruits and vegetables, with the developing nations, driven by a more affluent emerging market consumer, already out-consuming the developed nations.

Pick virtually any commodity and the story is basically the same. Copper, silver, iron ore, meat, corn, wheat, soybeans — the future price of these commodities and others will increasingly reflect the rising per capita incomes and attendant jump in consumption among consumers in the developing nations.

In the end, the world has changed. In the years ahead, the global economy will increasingly beat to the tune of Bo, Leyla, Sarah, Philippe and Seema and millions of other middle-class consumers like them.

The rising middle classes are trailblazers in their own nations and are agents of global transformation.

Developing nations accounted for about a third of world GDP in 1980. They now account for over 55%.

Millions of workers in the emerging markets are also consumers.

In Shanghai, Dubai, Mumbai or São Paulo, a new visitor is struck by the local consumer's vigor and vitality.

The aftershocks from the rise of the middle class in the developing nations are evident in various ways.

The monopoly the West has long enjoyed in devouring the world's natural resources is over.

The rising middle classes are trailblazers in their own nations and are agents of global transformation.

Developing nations accounted for about a third of world GDP in 1980. They now account for over 55%.

Millions of workers in the emerging markets are also consumers.

In Shanghai, Dubai, Mumbai or São Paulo, a new visitor is struck by the local consumer's vigor and vitality.

The aftershocks from the rise of the middle class in the developing nations are evident in various ways.

The monopoly the West has long enjoyed in devouring the world's natural resources is over.