The United States: From Global Vanguard to Global Hindrance

The United States used to be the key force promoting global governance. What are the global consequences of America’s deeply divided domestic politics? 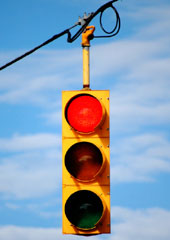 We live in uncertain times. An oft-heard lament is that we are lacking the kinds of leaders to move the global agenda forward. Whether it is the head of the UN, IMF, World Bank, WTO, European Commission or national governments, they are all portrayed as uninspiring and a cause of our current malaise.

In the past, it is said, we had different leaders, more dynamic ones, people who identified the challenges clearly and who managed to rally the “troops” (i.e., their citizens) around them. Hence, they were actually able to solve problems.

One can only wish it were so. Glorifying past leaders is usually not a sign of particular acumen in historical judgment or circumstance, but an indication of a personal aging process on the part of those lamenting the decay in leadership quality.

As a German born in the second half of the 20th century, I must confess to an inherited doubt in the ability of leaders to “fix” things. “Eighty percent of success,” Woody Allen said, “is showing up” — at the right time, one might add.

Rather than focusing on individuals as leaders and their potential transformative powers, it is far more relevant to think in terms of leadership cultures exercising their role in the proper, forward-thinking manner. It is here that the problems of our contemporary world are rooted.

We are living at the tail end of the American-dominated era, at a point in time when the Americans have abdicated their leadership role in many ways, even though they have not yet fully realized it.

Likewise, the rest of the world has taken note of the fizzling out of American dominance, but has not yet stepped up to the plate collectively to replace the United States, individually or, more likely, collectively.

Everybody, including America’s ideological enemies, has grown too comfortable with a world in which the notion of progress (or regress, depending on one’s viewpoint) could be laid single-handedly at the feet of the Americans.

Collective leadership is always much harder to do, or agree on, than de facto submission to one nation’s activity as a global standard-setter whose level of performance everybody strives to emulate or compete with.

It is this transition to the hazy nature of collective leadership, plus the ever more complex and interrelated character of the world’s problems, that makes our current period so frustrating.

What significantly adds to the frustration and sincere feeling of standstill (if not actual regress) is that the United States, as the last universal leadership culture, has taken on such a confusing mix of modernity and anti-modernity.

When it comes to the domain of information technology, the United States still often leads the way. But as soon as one moves to other, at least equally epoch-shaping, challenges of our time, then the retarding effect of U.S. leadership becomes irritatingly visible to all.

Instead of leading the race to find sustainable solutions to the energy and environment challenges, and throwing all of its vast material and intellectual resources at the task, the current U.S. political consensus worships the illusory notion of energy independence.

The central challenge of our time, as formulated by the UN’s High-Level Panel on Global Sustainability, is “to eradicate poverty, reduce inequality and make growth inclusive, and production and consumption more sustainable, while combating climate change and respecting a range of other planetary boundaries.”

As even the liberal and global-minded Brookings Institution has acknowledged, a vision of this kind has no chance to be adopted in the United States. The reason for that sobering assessment is not, as one might believe, an unwillingness to accept any limitations on the nation’s freedom of maneuver to benefit the international community.

The reason is that it runs counter to the U.S. growth model practiced throughout the entire course of American history. The eradication of poverty, nowhere more necessary than among its formerly enslaved population, remains as pressing among African-Americans today as it ever was.

Anybody who doubts this should take a tour of the residential parts of downtown Detroit trip or watch “The Wire,” HBO’s realistic portrayal of the way things are in the city of Baltimore.

Reduce inequality? The last three decades of income developments in the United States speak a very clear language about the real priorities of U.S. business and political leaders. They have clearly benefited from having what can only be described as a cowed underclass that is growing ever larger in size and now contains large segments of what formerly described as the white working class.

Viewed from that domestic vantage point, any commitment to international goals such as the ones embraced by the UN’s High Panel could only be described as self-defeating. Hence the ardent attempts by Republican politicians and the Wall Street Journal’s editorial page to criticize “European socialism.” That would be the Europeans who by and large do subscribe to the UN Panel’s views.

This also explains the sudden outburst of harsh criticism of Brazil and Dilma Rousseff. Ever since the days of presidents Cardoso and da Silva, Brazil has laid down the gauntlet to the other large power in the Americas.

Brazil has chosen to pursue a strategy of inclusive growth and poverty eradication. Its leaders realize that condemning a vast segment of the population is not just politically risky, but also condemns the country to underperforming in terms of its potential for human development.

The fact that Brazil’s slave population was actually larger than the United States’ — and that slavery persisted even longer down there — adds to the nature of the challenge.

Brazil is supposed to be more raw and less developed. It cannot therefore choose to supersede the United States in terms of making a systematic top-down and bottom-up effort to break the chains of poverty, lack of education and crime among its young black population.

But Brazil has chosen to do so. And that puts the United States potentially in the embarrassing situation that it is dealing with the historic chains of poverty about as successfully as India and not as determinedly as Brazil.

India’s failure to address mass poverty, inequality, destitution and discrimination is unforgivable. It is only ameliorated by the fact that the United States, although certainly at a different level of per capita income, is accepting the same retrograde standards in its social policymaking.

This has traditionally not been a political problem, because such poverty and destitution was mostly limited to African-Americans.

True, there have always been some white pockets of extreme white poverty in the United States, especially in the “coal country” of Appalachia and in the Deep South. But those had been considered fixable. Plus, there always was — and still is — the (false) comfort of Calvinism, which conveniently held that these people had just not tried hard enough to escape their poor lot in life.

But white poverty is not just in remote rural areas. It is now getting ever more widespread in the former manufacturing regions of the United States. That changes the story line.

Significantly, the old antidote to combat the potential poison of white, class-based frustration does not work so well anymore. Stoking nation-based hatreds between working-class whites of Irish, Italian or Polish extraction is a time-tested way to use the “management” of various waves of immigration to systematically oppress any real emergence of workers’ rights in the United States in terms of their social and economic protection that would be comparable to those reached in Europe.

What emerges from this survey of the international landscape is that the United States, for all its past achievements, today increasingly lives off modernist pretensions.

Just consider the current political discourse in the United States. It focuses on battles that were fought in “old Europe” in the late 19th century — and makes them the stuff of political strife in America’s 21st amazingly with an uncertain outcome as of yet. Witness the continuing debates about health care and gun ownership.

If a country is still enveloped in fighting such archaic battles at home, then it is no surprise that the forward movement on solving the world’s real problems is so impaired.

That statement is not intended as an indictment of the United States. The real consequence of this finding is that the rest of the world must step up to the plate and cannot comfortably blame the United States for the entire standstill.

What must urgently be recognized is just how much the United States has transformed itself from world-beater and standard-setter to laggard and retrograde force.

To get to the future of the world, we must contend with a very advanced country whose conservative business and political elites seriously prefer to think in terms of biblical justice and retribution, as well as the exercise of God’s pure will onto an errant mankind, instead of tackling environmental challenges.

Twenty years ago, it would have been unimaginable that it is U.S. politics that is extremely ideology-laden, while, aside from “old Europe’s” determination, the primary rational force in the world today is perhaps the set of engineers that collectively make up China’s leadership.

With their engineering mindset and pragmatic can-do approach, the Chinese set goals for companies and industries to perform cleaner and better. In China, there are no fundamentalist debates about the justification of environmental targets. It’s a competition over the how-to, not the whether or not.

That is, in case you didn’t notice already, the pragmatic stance that used to define America — and was long considered its essence. No longer. The best of America’s traditions have been hijacked by a rapacious and irresponsible political and business elite interested only in the maximization of its own short-term material gains.

In this latter point, of course, U.S. elites may find themselves curiously united with significant parts of China’s political and business establishment that appears to worship the same false gods of individual profiteering and collective irresponsibility.

We surely live in a very different world from the one of our fathers and mothers.

The rest of the world must step up to the plate and cannot sit back comfortably blaming the United States for the entire standstill.

The United States is dealing with the historic chains of poverty about as well as India, although at a different level of living standards.

Collective global leadership is always much harder than submitting to one nation as a global standard-setter.

The domestic U.S. policy stalemate is irritating and holds back the solution of pressing global issues.

Americans have abdicated their leadership role in many ways — even though they have not yet fully realized it.

The rest of the world must step up to the plate and cannot sit back comfortably blaming the United States for the entire standstill.

The United States is dealing with the historic chains of poverty about as well as India, although at a different level of living standards.

Collective global leadership is always much harder than submitting to one nation as a global standard-setter.

The domestic U.S. policy stalemate is irritating and holds back the solution of pressing global issues.

Americans have abdicated their leadership role in many ways — even though they have not yet fully realized it.